As published in the Northwestern Research News, Lucy Godley, CBC Scientific Director for UChicago, highlighted the benefits of the CBC to the biomedical research in Chicago, while speaking at the Drug Discovery Forum, held at NU, May 12, 2017.

From left: Alicia Loffler, associate provost for innovation and new ventures and executive director of INVO; Thomas O’Halloran, Morrison Professor of Chemistry and director of the Chemistry of Life Processes Institute; and Peter Schultz, founding director of the California Institute for Biomedical Research (Calibr) and CEO of the Scripps Research Institute. Photos by Jim Prisching

How can new approaches to public-private partnerships accelerate drug discovery from the laboratory bench to the patient bedside — and onto the radar screens of potential investors?

On May 2, Northwestern hosted a forum to explore this question, convening thought leaders to discuss a topic that has burgeoning relevance for the University’s research mission as well as for the pharmaceutical industry. Sponsored by Northwestern’s Center for Developmental Therapeutics, part of the Chemistry of Life Processes Institute, in partnership with the Innovation and New Ventures Office (INVO), the event took place on the Evanston campus.

The firm’s primary partner has been Scripps, with which Calibr signed an agreement in October to essentially “glue two existing organizations together,” said Schultz. Calibr in turn is partnering to advance Scripps discoveries with drug companies like Merck, Bristol Myers, and Pfizer, as well as with funders such as the Bill and Melinda Gates Foundation and Juvenile Diabetes Research Foundation. 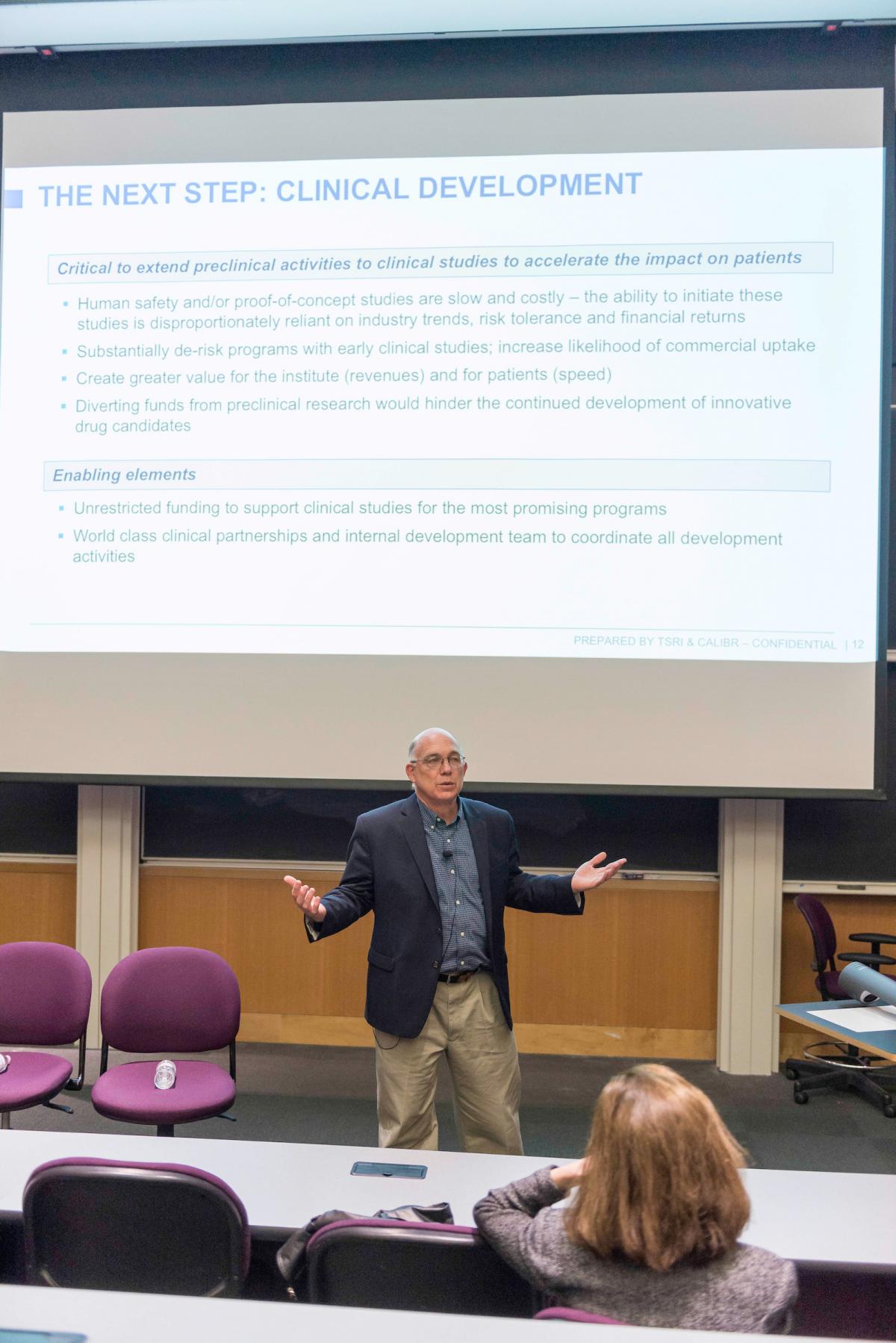 As a nonprofit organization, Calibr has built a $100 million pharmaceutical research fund into which investors can contribute and either earn a financial return or else gain a tax deduction, depending on the research outcome, Schultz explained. “If something good happens and you create value … we give the investors their money back [with a return],” he said. “If it doesn’t, it goes down as a contribution. That’s the new model, and it’s very appealing to investors.”

With 130 employees and an overall funding pool of $260 million, Calibr’s goal is to create new medicines for unmet needs, Schultz said. For example, the nation’s approximately 38 million osteoarthritis patients lack an effective treatment right now, he said, but his organization has been researching options that would create new cartilage, taking a reparative approach to the disease. “We think if we’re successful with this first fund, this thing will grow and grow,” he said. “The model we’re building is a work in progress. If it works, other people can copy it.”

Other Forum speakers noted how Chicago has tended to lag behind the East and West Coasts in terms of healthcare technology and bioengineering. However, they said the city and surrounding region has tremendous potential if various players can become less siloed and work together.

Steve Collens, CEO of MATTER, a healthcare incubator, cited several encouraging facts: The metropolitan area has multiple companies in every sector of the healthcare industry; excellent healthcare providers as well as engineering and business schools; and a wealth of medical conferences and medical associations. “We historically have not had a community that fosters and facilitates entrepreneurialism in healthcare,” he said, adding that he is optimistic about those circumstances changing. “Success begets success.”

Lucy Godley, scientific director at the Chicago Biomedical Consortium and medical professor at University of Chicago, highlighted how the Consortium has brought together researchers from Northwestern, the University of Illinois-Chicago, and her own institution to collaborate, rather than compete as they strive to accelerate biomedical discovery. In combining efforts, she said, the partners have gained “guidance on how to apply ideas and take them to industry. We want to foster a great environment in Chicago.” 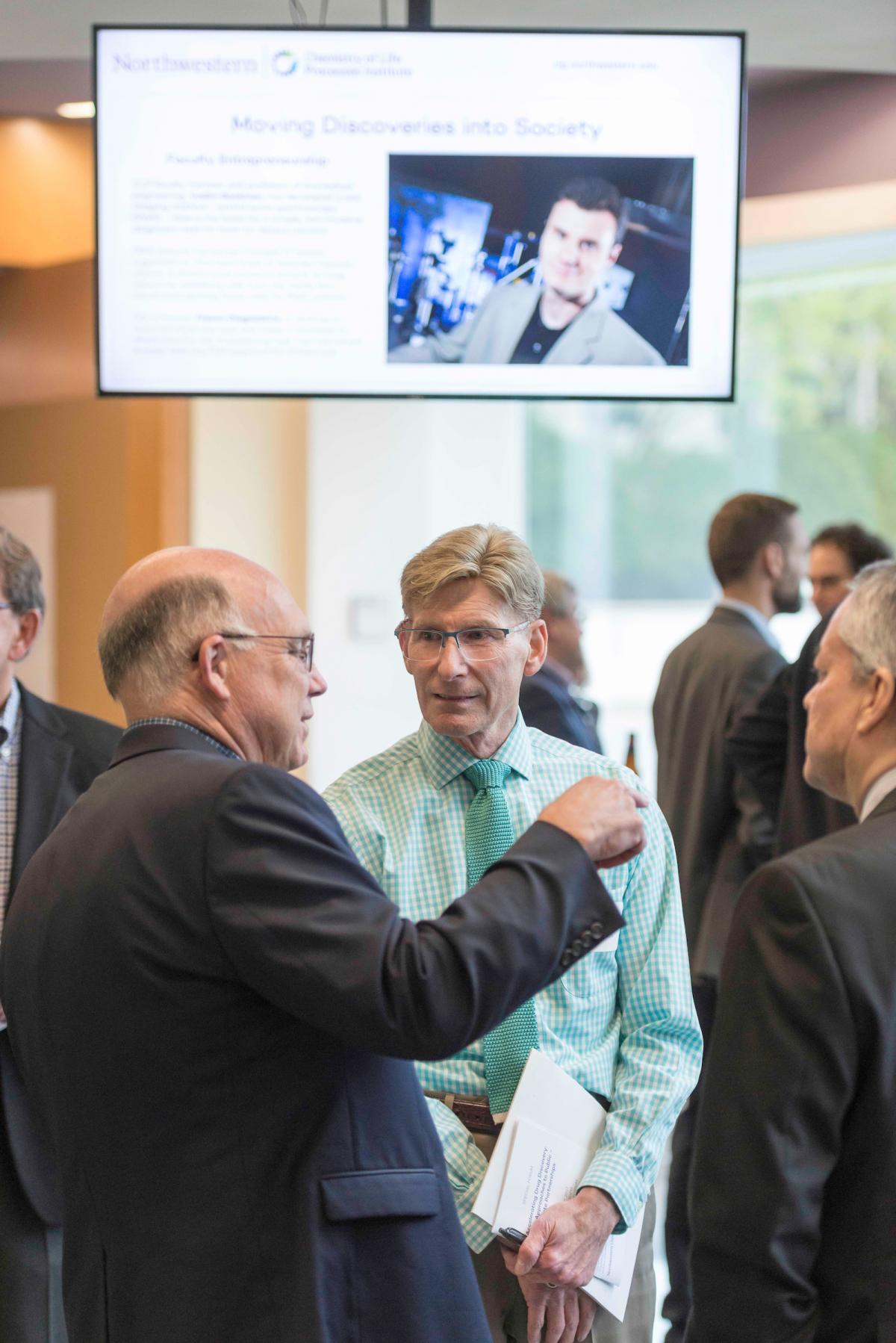 Peter Schultz talks with Richard Silverman, Patrick G. Ryan/Aon Professor of Chemistry and Professor of Molecular Biosciences, whose research group made the scientific discovery that produced the blockbuster drug Lyrica.

The Northwestern Forum is part of the University’s commitment to harnessing the power of interdisciplinary research among fields such as life sciences, physical sciences, and engineering, said Thomas O’Halloran, Morrison Professor of Chemistry and director of the Chemistry of Life Processes Institute. That mission includes efforts to translate research into the marketplace where it can exert a profound beneficial impact on human health.

“We’re training the next generation of interdisciplinary scientists, and we’re helping them understand that interactions with the business world are critical if a new discovery is going to make it out of the lab and into the world where it can help people,” said O’Halloran. “Northwestern has been excellent over the last 5 to 10 years in building that infrastructure.” He said that he also would like to see joint ventures between Northwestern and Scripps. “We could bring real value to them, and they could help us and our investigators. It could be a win-win.”

Alicia Loffler, associate provost for innovation and new ventures and executive director of INVO, noted that 58 start-up companies have been launched at Northwestern, two-thirds of them in life sciences and 12 of those in therapeutics. “We know we are going to continue growing,” she told Forum attendees. “We are excited about the new research coming up and the products we’re creating.”

Richard Silverman, Patrick G. Ryan/Aon Professor of Chemistry and Professor of Molecular Biosciences, whose research group made the scientific discovery that produced the blockbuster drug Lyrica, also attended the Forum. He said that he hopes to see more startups and new ventures in the Midwest.

“It was inspiring to get these people together and talking to one another,” said Silverman, a founding member of the Chemistry of Life Processes Institute. “This was a good starting point.”

Originally published in the NU Research News, by Ed Finkel, May 12, 2017