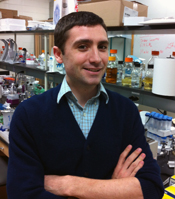 While huge advances have been made in engineering production of medically relevant compounds in bacteria, the process is hugely time and labor intensive. My project is part of an international collaboration looking to design a methodology for the dynamic and tunable assembly of synthetic operons which allow bacteria to self-assemble complex operons for the synthesis of relevant drugs and molecules. Specifically, my project is working on ways for bacteria to reliably exchange genetic information upon induction with a small molecule in a manner controlling gene directional flow and rate.