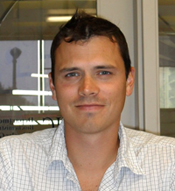 In embryonic stem cells, the Wnt signaling pathway promotes the maintenance of pluripotency. This occurs primarily through inactivation of a transcriptional repressor called Tcf7l1. Simply put, cells differentiate when Tcf7l1 is high and maintain their potency when it is low. Poorly differentiated breast cancers (referred to as “triple-negative” or “basal”) exhibit a similar mechanism. My focus is on exploring the details of this mechanism in embryonic stem cells and using that information to identify therapeutic targets for this largely untreatable group of aggressive tumors.