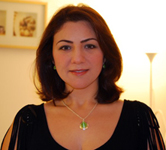 Over the past decade small interfering RNA (siRNA) have been considered a potent tool for modulating gene expression and offer great potential for controlling intracellular processes for the treatment of cancer and other devastating diseases. However the naked siRNA molecule is susceptible to serum nucleases, renal clearance, and wide biodistribution in its non-targeted form. These reasons collectively have continuously limited its application beyond preclinical studies.

My research focus is to develop a targeted siRNA nanomedicine that will address these delivery issues, using naturally occurring chemicals such as phospholipids and peptides. Our novel siRNA carrier will be applied for the treatment of liver fibrosis and cirrhosis, as a disease model, which is a devastating condition resulting as a consequence of chronic liver injury and have no approved treatment other than liver transplant. Our siRNA nanomedicine is expected to knockdown the over-expression of CTGF, which will result in the degradation of fibrous ECM and reverse the activation of hepatic stellate cells to stop and reverse the progression of fibrosis.