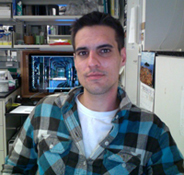 Over the last decade it has become apparent that non-coding microRNA, and more recently long non-coding RNA (lncRNA), are intricately woven into regulatory gene networks. One of the most exciting discoveries to come out of these studies is that certain lncRNAs can recruit repressive histone-modifying complexes to specific genes, and thereby affect epigenetic silencing. There are now hints that parallel mechanisms may exist to recruit activating histone-modifying complexes. I am exploring the hypothesis that lncRNAs serve as a bridge between the human histone methyltransferase complex Mixed Lineage Lukemia (MLL) and its gene targets. I am also interested in deciphering how lncRNAs recruit histone-modifying enzymes to gene targets in molecular detail, and if there are common RNA structural motifs that define a methyltransferase ‘binder’. By utilizing the tools of molecular biology, bioinformatics, and biochemistry, we hope to contribute towards a consensus model for the largest subclass of the genome’s "dark matter."