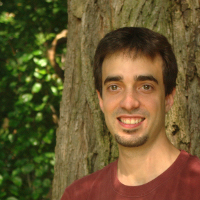 During fly retina pattering each compound eye repeats hundreds of times, in a stereotyped fashion, the transition from eye stem-like progenitors to differentiated cells, creating a regular pattern occurring all over the adult eye. I use the developing fruit fly eye as a model to study how a biochemical network can safeguard cells against genetic or environmental perturbations that could disrupt the normal transit from stem-like progenitors to differentiated cells. I am combining genetics, microscopy, image processing and computational modeling to quantitatively study how the architecture and dynamics of a biochemical network can robustly regulate of the progenitor to differentiated cell transit. These studies could shed light into systems-level principles that cells use to properly regulate developmental decisions. My thesis could also provide insights into how changes in the organization of a network could result in loss of the ability to robustly regulate developmental decisions.