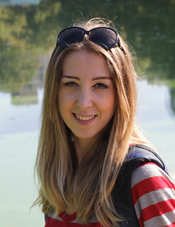 My research objectives are to gain a more detailed knowledge of the possible role of Theiler’s murine encephalomyelitis virus (TMEV)-induced cell death during TMEV persistence in the mouse central nervous system (CNS). Studying the cellular mechanisms involved in regulation of viral infectivity is crucial for understanding the persistent CNS infection. However, the involvement of cellular genes that regulate TMEV persistence remains largely unexplored. Extensive evidence demonstrates that the anti-apoptotic Bcl-2 family plays a major role in regulating apoptosis in immune cells. I am studying the mode of BeAn virus-induced cell death in BHK-21 cells, the role of Bcl-2 family pro-survival proteins and the effect of apoptosis and necrosis on TMEV replication. To investigate the role of Bcl-2 family proteins on TMEV-induced cell death in greater details, we generated a stable transfected BHK-21 cell line that expresses low levels of these proteins. Analysis of one-step growth kinetics in knock-down cells will be performed to determine virus titers. These studies will provide a better understanding of the regulation of TMEV-induced cell death and help elucidate the nature of the persistent CNS infection.

The loss of infectivity during BeAn-infection of murine macrophages has been demonstrated to be temporally associated with apoptosis. However, the mechanism that leads to the loss of infectious virus is not understood. I am also studying viral RNA replication, protein synthesis and viral assembly in various cell lines that undergo apoptosis or necrosis. These studies hopefully will shed some light on the mechanism of how apoptotic cell death regulates the TMEV life cycle that results in loss of capsid integrity and of infectivity.