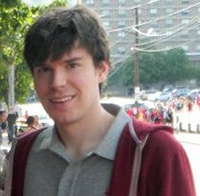 Although they are implicated in many cancers, most protein targets in the ubiquitin proteasome system are considered undruggable. However, many of these targets contain essential cysteines which could be inhibited by a covalent drug. The recent FDA approval of afatinib and clinical trial success of ibrutinib have validated cysteine-reactive covalent drugs as cancer therapies. Yet despite the burgeoning interest in covalent drugs, there is no method to systematically screen irreversible inhibitors to identify novel leads. We have developed a general screening method to discover novel cysteine-reactive inhibitors using a fragment-based approach. The key to our method is that it ensures any hits will be selected based on their ability to specifically bind to the protein and not simply due to their greater reactivity. A library of 100 fragments was then screened in batches of ten against the controversial oncoprotein Nedd4-1. There were two hits against Nedd4-1 which were surprisingly not found to inhibit its catalytic cysteine but another essential cysteine. This represents a novel class of inhibitors for a biologically significant target with no tractable small molecule leads. Studies are currently underway to optimize these hits and test their suitability as therapeutics.

Kathman SG, Span I, Smith AT, Xu Z, Zhan J, Rosenzweig AC, Statsyuk AV. A Small Molecule That Switches a Ubiquitin Ligase From a Processive to a Distributive Enzymatic Mechanism. J Am Chem Soc. 2015 Sep 22. [Epub ahead of print] (PubMed)