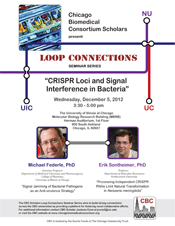 The second CBC Scholars ‘Loop Connections’ Seminar was held on the UIC campus on December 5, 2012. The seminar’s theme was “CRISPR loci and signal interference in bacteria.” Over 70 students, postdocs and faculty from all three CBC campuses attended talks by Dr. Michael Federle from UIC and Dr. Erik Sontheimer from NU.

Dr. Federle discussed how bacteria develop resistance to antibiotics due to survival pressure. One strategy for developing new antibacterial drugs is to target virulence regulation pathways. One such pathway is quorum sensing or cell-to-cell communication. This pathway relies on the generation and secretion of small signaling molecules that regulate bacterial gene expression. Bacterial colonies recognize these signals and use them to coordinate group behaviors. A way to reduce bacterial virulence is to cause the communication to be “jammed”. He gave examples from his lab’s research on the quorum-sensing pathways of Streptococcus pyogenes and how they are screening for small compounds that interfere with these novel pathways. Dr. Sontheimer presented his lab’s research on the CRISPR loci, a defense mechanism against invasive lateral genetic transfer found in numerous bacterial species. In describing the general mechanism by which CRISPR functions, he contrasted it to RNAi in the processing mechanisms, pathways involved and DNA targets. Dr. Sontheimer uses the genus Nisseria to investigate the CRISPR machinery and presented results showing that CRISPR protects against the expected transduction and conjugation routes of transfer and also against specific plasmid transformations. An added benefit of the ‘Loop Connections’ Seminar to both speakers was having the time to discuss multiple aspects of their research and the potential of forming a future collaboration.

Both talks were well received by the audience and many intriguing questions were asked. The CBC Scholars joined the seminar speakers for a mentoring dinner. The dinner conversation was lively and many research and career topics were covered. The next CBC Scholars ‘Loop Connections’ Seminar will be advertised on the CBC webpage so be sure and check our home page in early 2013 for the announcement!