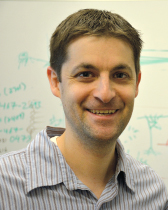 CBC Junior Investigator Daniel Dombeck of NU, was selected as a recipient of a 2015 McKnight Scholar Award for his lab’s research project entitled, “Functional Dynamics, Organization and Plasticity of Place Cell Dentritic Spines.”

The McKnight Scholar Awards are granted to young scientists who are in the early stages of establishing their own independent laboratories and research careers and who have demonstrated a commitment to neuroscience. The Endowment Fund seeks to support innovative research designed to bring science closer to the day when diseases of the brain can be accurately diagnosed, prevented, and treated.

The McKnight Endowment Fund for Neuroscience is an independent organization funded solely by The McKnight Foundation of Minneapolis, Minnesota, and led by a board of prominent neuroscientists from around the country. The McKnight Foundation has supported neuroscience research since 1977. The Foundation established the Endowment Fund in 1986 to carry out one of the intentions of founder William L. McKnight (1887-1979). One of the early leaders of the 3M Company, he had a personal interest in memory and brain diseases and wanted part of his legacy used to help find cures. The Endowment Fund makes three types of awards each year. In addition to the McKnight Scholar Award, they are the McKnight Technological Innovations in Neuroscience Awards, providing seed money to develop technical inventions to enhance brain research, and the McKnight Memory and Cognitive Disorders Awards, for scientists working to apply the knowledge achieved through basic research to human brain disorders that affect memory or cognition.

Dan joined the Department of Neurobiology in February 2011 as an Assistant Professor and set up his laboratory on Northwestern University’s Evanston campus. Dan was selected as one of six outstanding newly recruited Assistant Professors who had accepted faculty positions at CBC institutions to receive a CBC Junior Investigator Award.