The CBC welcomes new Scientific Director for The University of Chicago, Lucy Godley 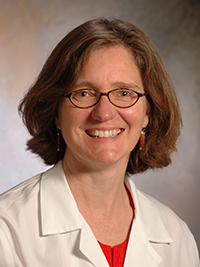 Dr. Godley is a Professor of Medicine in the section of Hematology/Oncology at The University of Chicago. After receiving her PhD from UCSF and MD from Northwestern, Lucy did her residency and fellowship in Hematology/Oncology at UChicago, and she has been on the UChicago faculty since 2003. In addition to caring for patients, her active research lab studies epigenetic changes and their relationship to changes in chromatin structure and gene regulation in cancer cells. She has contributed to a series of seminal studies that identify mutations in DNA methyltransferases as underlying causes of cancer. Her current research focuses on molecular genetic and epigenetic studies of hematologic malignancies.

Dr. Godley takes over the role of CBC Scientific Director from Shohei Koide, PhD, who has been appointed Director of Cancer Biologics at the Laura and Isaac Perlmutter Cancer Center at NYU. We are grateful for Shohei’s five years of dedicated service to the CBC, and wish him the very best in his new position.