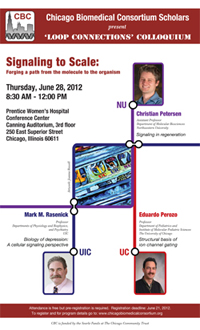 Nine new CBC Scholars were welcomed to the CBC at a luncheon on January 7, 2013 at Bistrot Margot in Chicago’s Old Town neighborhood. The new Scholars – three from each of the CBC universities — were joined by the Class of 2012, the CBC Scientific Directors and members of the CBC staff. The CBC Scholars Program is in its fourth year of operation and aims to develop a leadership forum for students from the three CBC universities to advance the CBC mission of fostering collaboration and excellence.

During the lunch, each Scholar presented a short summary of their thesis research and discussed future events that the Scholars would like to organize and participate in. Their 2013 agenda includes fostering the ‘Loop Connections’ seminar series, serving as judges at the Chicago Public Schools Science Fair, attending the Annual Scholars Scientific Exchange at which short research talks are given by each Scholar and expanding their involvement in the CBC Annual Symposium. The Scholars also expressed interest in developing new outreach programs geared towards undergraduates and in career development workshops.