The CBC is proud to have supported the research of seven out of 40 under 40 HALO-nominated scientists in Chicago! 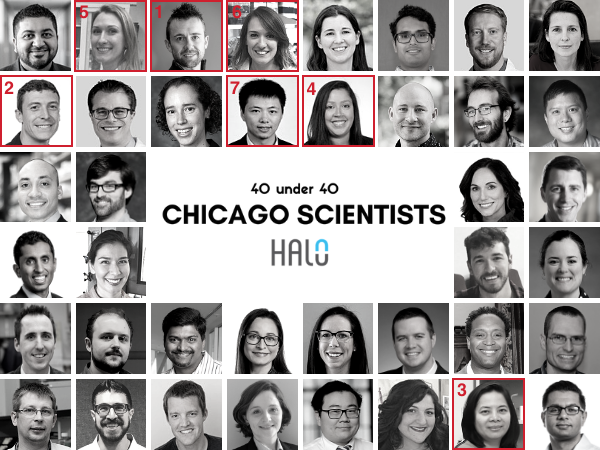 Seven out of 40 under 40 HALO-nominated scientists in Chicago are CBC awardees or affiliates (see below). Image (modified) courtesy of HALO.

Yesterday, HALO – an organization that “connects scientists with opportunities to translate their research into real-world applications” – announced the 40 under 40 scientists in Chicago. Across a range of specialties, they represent five universities, six startups, two research hospitals, two Fortune 500 companies and one national laboratory.

From developing hydrogels for faster wound healing to identifying a new biomarker for neuroblastoma, these forty scientists represent the next generation of big shoulder Chicago scientists working to translate innovation into application, from bench to bedside. Like most of science, those who ultimately benefit from their efforts may still be generations away.

Join [HALO] in saying “Thank You” to these rising stars and [the] three “Heroes of Medicine” at the 2nd Annual Halo Awards on Saturday, October 12 at the Museum of Science and Industry.

The CBC is proud to share that seven out of 40 under 40 HALO-nominated scientists in Chicago are CBC awardees or affiliates from all three CBC universities as well as from a CBC-university startup. In other words, 17.5% (approaching 1 in 5) of the honored Chicago scientists under 40 are connected to/have benefited from a relationship with the CBC. Their ties to the CBC are listed below: