The second CBCAN meeting took place on July 20, 2017 at the Prentice Women’s Hospital in downtown Chicago. 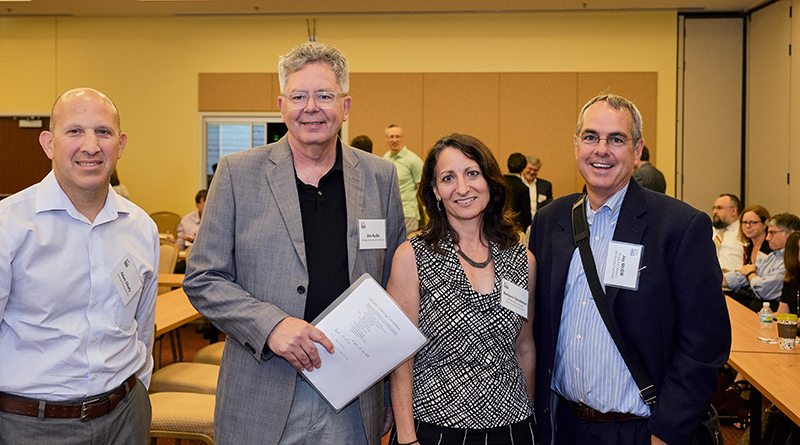 Katie Stallcup, CBC Executive Director, opened the meeting by welcoming all guests and introducing Jim Audia (second from the left), the incoming CBC Executive Director, who will assume his new role effective August 1, 2017. Jim spoke of his excitement about joining the Chicago research community and summarized his vision of the CBCAN program “as a new forum to nurture entrepreneurial culture among university scientists.” Jim emphasized that in the greater Chicago area, all the right ingredients are already in place to create a vibrant community of industry experts, university tech transfer officers, and researchers with discoveries that may have commercial potential. All could greatly benefit from interacting and connecting at CBCAN meetings. Jim highlighted the importance of CBCAN in facilitating the “early commercial guidance” that university-based researchers need to move promising discoveries into and forward in the pipeline towards commercialization.

Lucy Godley, CBC Scientific Director (UChicago), introduced the first of the new CBC Phase 2 Award programs, CBC Accelerator Awards that are designed to support research that has strong translational potential. In addition to funding, Award recipients will be matched with mentors who will provide “early commercial guidance” towards key milestones for successful translation. The Accelerator program will be tightly integrated with CBCAN and Accelerator awardees will provide project updates at CBCAN meetings. Accelerator Awards will provide $100,000 for one year, with the possibility of a second year of funding for projects that have made significant advances towards or have met proposed milestones during the first year. The RFA for the CBC Accelerator Award Program will be announced this fall.

Panel 2: How does CBC engage and enlist other members of the ecosystem in selecting and mentoring Accelerator projects?
Moderated by: Brian Kay, CBC Scientific Director, UIC
PANELISTS:

The next CBCAN meeting is scheduled for October 26, 2017. The October meeting will be devoted to discussing the second new CBC program—Entrepreneurial Fellows—that will aim to identify and support a cohort of young researchers who are keen to work in the biotech start-up space of Chicago. Stay tuned for future updates!