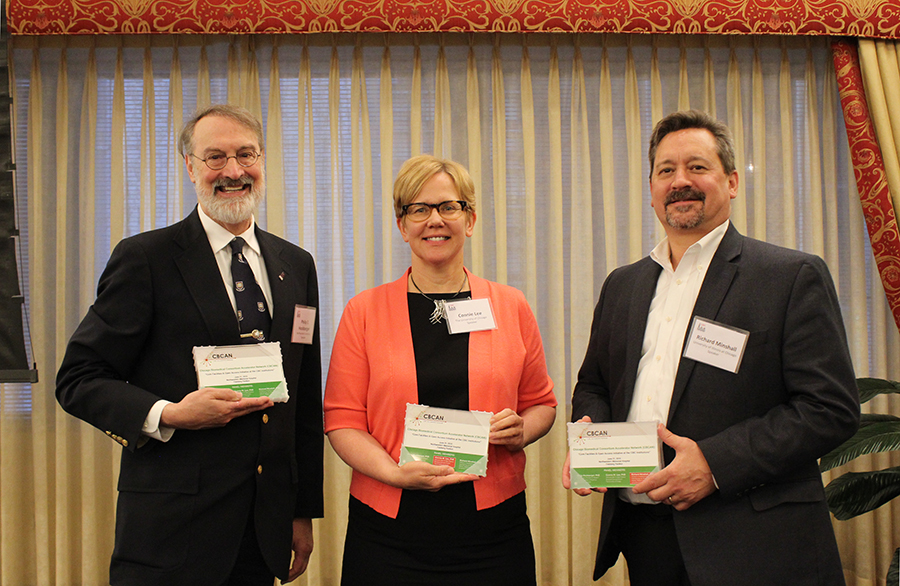 The CBC Accelerator Network (CBCAN) program regularly brings together industry experts, university tech transfer officers, researchers and others from the local and extended biomedical ecosystem. The main goal of the CBCAN forum is to provide early commercial guidance to universities and university-based researchers in order to move promising discoveries into and forward in the pipeline towards commercialization. Often such efforts leverage and rely upon the Core Facilities across the CBC institutions to supplement and extend beyond the capabilities existing in the laboratory of the original PI, making this an attractive topic for the CBCAN. Phil Hockberger, Associate VP for Research, represented Northwestern’s Core Facilities; Connie Lee, Associate Dean for Basic Sciences, Biological Sciences Division, represented UChicago’s Cores; and Rich Minshall, Professor of Anesthesiology, Pharmacology and Bioengineering, Director, Research Services Center, represented UIC’s Cores.

Beginning with Phil, who also presented some background on the Open Access Initiative and the role played by CBC in establishing that agreement as well as supporting investment in the core infrastructure, each speaker provided an overview of the capabilities at their institution, focusing on some unique attributes that they provide. The group also spoke to some gaps that currently exist in these shared capabilities and resources, setting the stage for the discussion that was to ensue.

Following the presentations, Jim Audia moderated a lively and engaged discussion on the gaps identified, including capacity for medicinal chemistry, mentorship and translational funding, and turned toward possible solutions to mitigate the gaps. For example, the mentorship gap is one previously identified by CBC and is the focus of several current and future programs, including the Accelerator Award and Entrepreneurial Fellows program. The translational funding has been previously identified and hopefully will be lessened by exciting new investments in the Chicago community including the Discovery Partners Institute and Lakeside Discovery.

Following the lively discussion, the group engaged in an enjoyable networking reception.

The panel discussion was recorded for those unable to attend and is posted below.