CBC is pleased to announce that, with the support of a CBC Lever Award, the Chicago Synthetic Antibody Pipeline (CSAP) is now open to the CBC community. 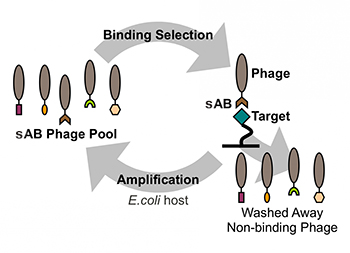 It is well known that the majority of monoclonal antibodies are expensive, have very limited applications and frequently do not work effectively. Fortunately, due to pioneering work by a Chicago-led team, a major effort is underway to economically produce the next generation of affinity reagents. The core element of the established technology platform is a high throughput pipeline to generate customized synthetic antibodies (sABs) using novel phage display libraries and selection strategies (see right). Their attributes provide for the ability to generate sABs that not only have high affinity and specificity to their target antigen, but also can be engineered to: 1) target specific regions on the surface of the antigen, 2) recognize specific conformational or oligomeric states, 3) induce conformational changes, and 4) capture and stabilize multi-protein complexes. Additionally, they are recombinant proteins, whose DNA can be archived and stored. These expanded functions provide the tools to investigate systems at a level that cannot be even contemplated using traditional monoclonal approaches.

Due to a CBC Lever Award, CBC researchers have special access to this powerful technology.

The Center for Production of Affinity Reagents for Human Transcription Factors: Chicago Synthetic Antibody Pipeline (CSAP) was established in May 2012 with a CBC Lever Award. The principal investigators on the Lever Award are Anthony Kossiakoff and Geoffrey Greene (UChicago), Brian Kay (UIC) and Jason Brickner (NU). The CSAP headquarters are at the University of Chicago. The CBC Lever was awarded in conjunction with a NIH U54 grant, titled “Recombinant Antibody Network (RAN),” which, in addition to Chicago participants, also involves scientists from the University of California, San Francisco and the University of Toronto. The goal of the NIH grant is to generate renewable, high quality affinity reagents against all human transcription factors. The Lever Award enables use of the NIH RAN infrastructure to generate affinity reagents for the CBC community against a variety of targets, including membrane and soluble proteins, protein complexes and functional RNA. Investigators will also have access to the synthetic antibodies that have already been (or will be) generated from the NIH project. These targets include human transcription factors and epigenetic regulatory proteins.

CBC researchers can benefit from the CSAC in two ways: