The third CBCAN meeting took place on October 26, 2017 at the Prentice Women’s Hospital in downtown Chicago. The meeting was highlighted by lively discussion and a high level of engagement among the participants. 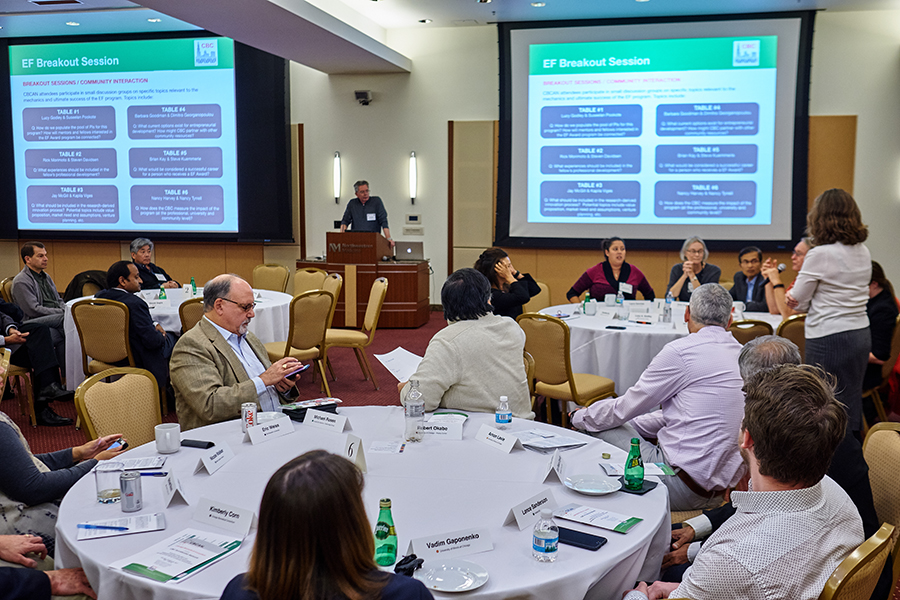 Jim Audia, CBC Executive Director, served as moderator and attendees included faculty members, Tech Transfer officers, members of the Chicago area biomedical community, and representatives from biotech startups and the Pharma industry. To encourage more active participation at the start of the meeting, attendees were asked to introduce themselves, to share their affiliation and their role in the biomedical community. Jim provided a brief update of the Accelerator Award program including the types of commercially-directed research that will be considered for funding (therapeutics or an associated biomarker or diagnostic), eligibility requirements, and a description of the application process. This program will foster interactions between academic researchers and industry/pharmaceutical experts. Accelerator awardees will be mentored by faculty, industry experts, and tech transfer officers, and will provide project updates at CBCAN meetings. The Accelerator Award RFA will be posted in mid-November on the CBC website. Letters of Intent (LOIs) will be accepted January 8–12, 2018, full proposals April 9–13 and funding decisions will be announced May 14, 2018.

The remainder of the meeting was devoted to an overview and discussions of the soon-to-be launched CBC Entrepreneurial Fellows (EF) Award program. The program aspires to attract fellows that will become leaders in the biomedical community and transform the healthcare and well-being of current and future populations. The EF program will support the professional development of academic biomedical researchers who are keen to move university based translational projects toward commercialization. EF awardees will receive guidance from representatives of the biomedical community and will participate and engage the CBCAN community. All CBCAN attendees participated in small breakout discussion groups on specific topics relevant to the ultimate success of the EF program. Following the discussions, a moderator from each discussion topic, provided a summary. The topics were:

The energy and engagement that was generated during the breakout sessions continued during the interactive networking reception. The October CBCAN event was the final meeting for 2017. Multiple CBCAN events highlighting Phase 2 applicants and awardees will take place in 2018. Stay tuned!