CBC Colleague Receives the UIC Innovator of the Year Award

Congratulations to Greg Thatcher, an active CBC participant and recipient of two recent CBC HTS Awards, for being honored the UIC Innovator of the Year! 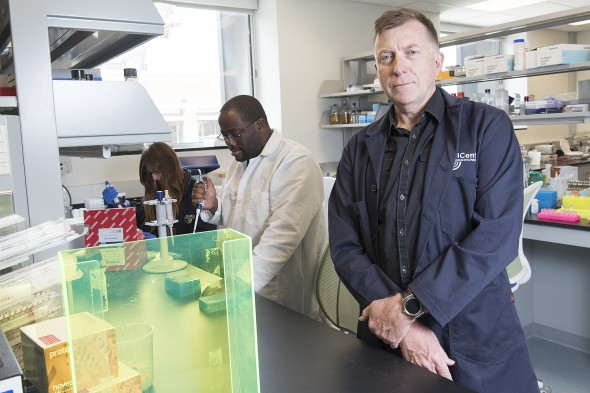 Each year, the Office of Technology Management celebrates UIC faculty inventors. The Innovator of the Year Award recognizes researchers who have advanced their inventions toward commercialization. The Inventor of the Year Award honors researchers whose discoveries have the potential for significant impact. The awards include a $3,500 prize and a plaque, which is prominently displayed in the hallway of the UIC Office of Technology Management.

Alzheimer’s disease, neurodegenerative disorders, cancer, sleep disordered breathing. The illnesses may seem dissimilar but they have one commonality: Greg Thatcher is working to find a cure for them all.

Throughout his career, Thatcher has melded his expertise in academia and science with business. His numerous patents have led to the launch of several start-up companies whose goal is to bring drug candidates to clinical trials.

Innovation does not just come from time and effort, Thatcher said, but also money.

“Venture capital financiers will tell you that ideas are 10-a-penny. In drug discovery, it will take $5 million to $10 million and two years to take an idea from bench to a signal that the drug has any effect in humans, and the cumulative risk of failure is over 90 percent,” said Thatcher, Hans Vahlteich Endowed Chair of Medicinal Chemistry in the College of Pharmacy.

“But for an idea to have value, we must try to move the idea beyond the academic setting to become a translational technology that can potentially provide real benefit to society at large and relieve the suffering of disease, even if the risk and effort is very high.”

The new company licenses agents for therapy of treatment-resistant breast cancer and an alternate family of agents for breast cancer that have also been out-licensed. He also has several Alzheimer’s disease technologies currently licensed to biotechnology companies. Both approaches to treating breast cancer were pioneered by a graduate student, Rui Xiong, proving
Thatcher’s mantra that smart, young trainees drive innovation.

Thatcher is also the founding director of a campus-wide center for drug discovery. The UICentre engages biomedical researchers in collaborative teams to translate ideas and inventions to small molecule, proprietary lead compounds for further drug research and development.

A faculty member since 2003, Thatcher has supervised or co-supervised more than 45 graduate trainees and has been involved in pre- and postdoctoral training and education, mentoring trainees who have proceeded to leadership positions in the pharmaceutical industry, bioventures and academia.

In addition to being named Innovator of the Year, Thatcher has also been named UIC Graduate Mentor of the Year and a University Scholar.

Thatcher is currently principal investigator or co-investigator on nine active grants, funded by either the National Institutes of Health, private industry, or the Chicago Biomedical Consortium.

“It is extremely clear that Greg is an innovator, and I can think of no one more deserving of this award,” Bauman said. “We are proud to have him at UIC and in our college.”