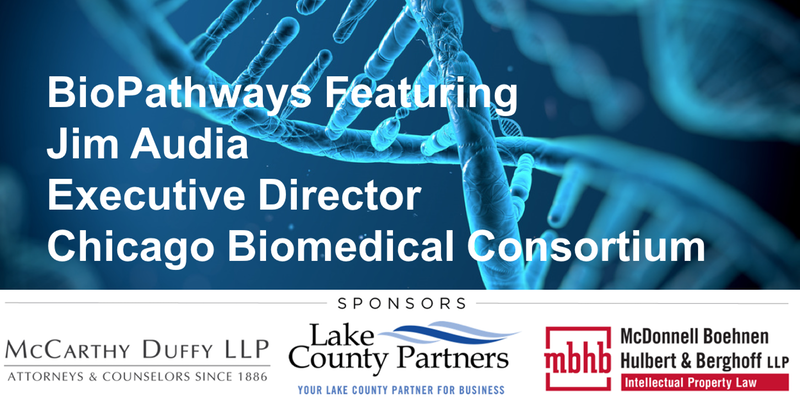 Jim spent the afternoon with RFUMS Executive Vice President for Research, Ron Kaplan along with Tom Denison, CEO and Co-Founder of Smart Health Activator learning more about the recent growth at RFUMS and Ron’s vision for its future role in the community. Jim shared his early learnings at CBC and his own views on how both organizations are joined in their ambitions to invigorate biomedical research in greater Chicago. This conversation served as a backdrop for a further discussion at a BioPathways-Entrepreneur Speaker Series event, where Jim was an invited speaker.

Following some introductory slides where he outlined the history of the CBC, its initial mission to enhance collaboration among the 3 major research institutions in Chicago and its evolving focus on translation and entrepreneurship. Jim outlined the current Catalyst Award program and introduced 2 new programs added as key elements of the CBC’s Phase 2 plan, the Accelerator Award and the Entrepreneurial Fellows program. The program then took on elements of a ‘fireside chat’ during which Michael interviewed Jim to learn more about his past experiences in pharma and biotech as well as his reasons for choosing to join the CBC.