CBC is pleased to note that its member institutions, Northwestern University, the University of Chicago and the University of Illinois at Chicago (UIC), are among the many biomedical research institutions in the greater Chicago region to benefit from increased NIH funding recently approved by Congress for 2018. Specifically targeted research areas to receive increased funding include: Alzheimer’s disease, cancer, Precision Medicine, the BRAIN initiative, and infectious diseases — key strengths of the member institutions and all areas that CBC has also supported in the past and continues to support during Phase 2. U.S. Senator Dick Durbin (D-IL) shared the news at a press conference at the Shirley Ryan AbilityLab Tuesday, March 27, 2018 (see below).
Contributed by: Jola Glotzer 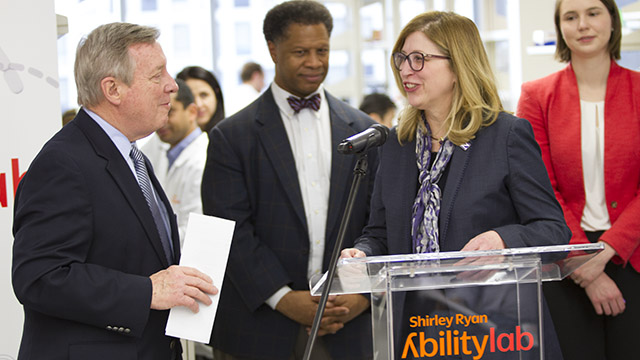 Pictured are Durbin (left), Dr. Robert Winn, director of the University of Illinois Cancer Center, and Teresa Woodruff, professor and vice chair for research in obstetrics and gynecology, dean of The Graduate School and director of the Women’s Health Research Institute, Northwestern University (at the podium). Source: Northwestern Now

“The Fiscal Year 2018 funding bill represents a significant and important victory for medical research nationwide and here in Chicago,” Durbin said. “I’ve made it a priority to ensure that the federal government is doing its part to make sure young researchers and bright scientists have the funding they need to develop new vaccines and discover treatments and cures for diseases like cancer and Alzheimer’s. Life-saving and life-improving advances – whether funded by NIH, by the CDC, or by the DoD– will only be realized if we continue on a steady, predictable growth path of investment in biomedical research.”

Durbin was joined by leaders from the Shirley Ryan AbilityLab, Northwestern University, University of Chicago, University of Illinois, Rush University Medical Center, and Lurie Children’s Hospital – all of which receive millions in NIH funding.

The spending bill also includes a $1.49 billion increase for medical research at the Department of Defense, so it can continue to support breakthrough research for service members, military families, and veterans.