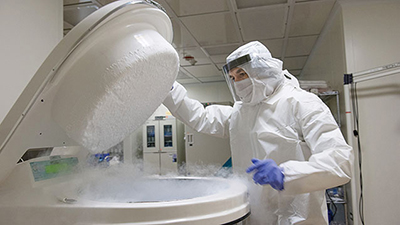 EVANSTON, Ill. — As research funding from the National Institutes of Health (NIH) and other federal agencies shrinks, cooperation among Northwestern University, the University of Chicago and the University of Illinois at Chicago is expanding.

With the strokes of three pens, Northwestern, UChicago and UIC launched an unusual — perhaps unique — collaborative venture by forming a core research facilities partnership. The universities’ provosts recently signed an agreement for “open access to research core facilities.” Simply put: there is no extra fee now to use each other’s fancy instruments.

The agreement builds on an existing partnership between the three universities focused on biomedical research: the Chicago Biomedical Consortium (CBC), established in 2006 with the mission of stimulating collaboration among scientists at the three institutions.

“It is creative and deep partnerships like ours that foster a real community and keep Chicago competitive as a research hub,” said Jay Walsh, vice president for research at Northwestern. “Federal research funding has been largely stagnant for about a decade, but our three institutions are doing well, in part because of strategic alliances with each other and with other regional research affiliates. This agreement is about reducing costs and increasing the availability of state-of-the-art research facilities.”

The pioneering memorandum of understanding (MOU) allows researchers from the three schools access to a partner’s instrumentation and expertise at no additional charge for an outside user (facilities and administration costs). Essentially, a research team now could have up to 60 percent more research dollars in its pocket than before when using a partner’s facility.

The long-term strength of the pact is to give researchers more choices of facilities right in the Chicago area. Faculty, postdoctoral fellows and graduate students already are taking advantage of resources located at the partner institutions, with no campus more than an hour’s drive away.

Such cooperation across institutions leads to collaboration and additional research funding, which in turn leads to more jobs for the Chicago area as well as the promise of research breakthroughs that could lead to clinical trials and, ultimately, improved health care.

“Research at core facilities opens up avenues that can lead to medical treatments and new ideas about treatments,” said Mitra Dutta, vice chancellor for research at UIC. “It is these basic science discoveries that clinicians pick up on and bring to clinical trials.”

As defined by the National Institutes of Health, a core facility is a centralized, shared resource that provides biomedical and behavioral investigators with access to instruments, technologies and services as well as expert consultation.

“Nationally, core facilities have become increasingly important in the last five years,” said Donald H. Levy, vice president for research and for national laboratories at UChicago. “Our ability to offer open access to three great research institutions’ core facilities is an important tool for recruiting and retaining faculty and students.”

Each of the three schools has from 20 to 60 core facilities offering a wide range of resources. UChicago has a biostatistics laboratory and pharmacology core, UIC a nuclear magnetic resonance lab and core genomics facility and Northwestern a skin disease research center and cell imaging facility, to name just a few.

A few years ago, the CBC funded an analysis of the pros and cons of open core facilities among the three schools. The analysis was positive, and faculty saw the advantage of eliminating indirect costs.

“The MOU represents a substantial, long-term effort,” said Philip E. Hockberger, director of core facilities at Northwestern. “We now have an agreement that benefits researchers at all three universities, and the CBC helped get the ball across the goal line.”