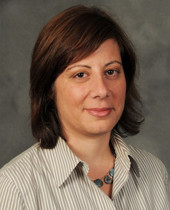 Dr. Hoffmann earned a Ph.D. in Molecular and Cellular Biology from the University of California Berkeley with Professor Joshua Kaplan and completed a postdoctoral fellowship at Brandeis University in the laboratory of Professor Gina Turrigiano. For the past two years, Dr. Hoffmann has been working as Senior Vice President of Deep Tech at P33, a privately funded nonprofit charged with elevating Chicagoland’s innovation economy and driving inclusive economic growth.

Prior to P33, Dr. Hoffmann spent 15 years helping life sciences companies grow, most recently as a Senior Vice President at Boston based Back Bay Science Advisors, an integrated strategy and investment firm to global life science companies and their investors. During her 8 years at Back Bay, Dr. Hoffmann led projects for large, publicly traded companies, as well as small, private, venture backed health care and life sciences companies. Dr. Hoffmann also worked closely with Back Bay’s investment team on two large transactions: an epigenetics platform that was sold to Gilead Pharmaceuticals for $65M and an agent to combat acute kidney injury that was acquired by AbbVie for $110M. Previously, she was Senior Manager, Center for Health Solutions and Pharmaceutical Market Lead, at Deloitte Research. Dr. Hoffmann also worked for Leerink Swan Strategic Advisors as a consultant/project manager, Capgemini/LECG as a consultant in their life sciences healthcare practice and at Fuld+Company as a senior analyst in Fuld’s healthcare practice.

“We are excited to have Dr. Hoffmann join us as the new CBC Executive Director. She brings expertise in innovation and entrepreneurship, as well as connections to an outstanding network of relationships with the pharma, biotech, and biotech investment communities within the Chicago biomedical ecosystem and beyond. We are thrilled to have Dr. Hoffmann lead the organization.”

The CBC was launched in 2006 with a generous grant of $5 million per year from the Searle Funds at The Chicago Community Trust (SFCCT). Through the end of 2020, $65 million has been invested in the CBC. During the 16 years of operations, the CBC has strengthened the Chicago biomedical community through a series of innovative Catalyst, Accelerator and Entrepreneurial Fellows programs, leveraging the strong foundation that has been established with a focus on translational research and entrepreneurship. Funding provided by the CBC has resulted in more than 360 grant awards and $856 million in additional research funding and resulted in over 2,600 peer-reviewed scientific publications that has brought together faculty across the CBC institutions into new collaborations. The CBC has helped scholars transcend institutional boundaries by spearheading the Open Access Initiative, which allows CBC-affiliated researchers to utilize research cores at any CBC university at the same cost as the home institution. The CBC has organized nearly 75 educational events, including 17 annual symposia, all showcasing research supported by the CBC.

“The Chicago Biomedical Consortium serves an integral role in building a robust biomedical sector in Chicago with impacts throughout the Midwest, nationally, and globally,” said Nydia Searle, Searle Consultant to The Chicago Community Trust. “We offer our hearty congratulations to Dr. Hoffmann. She brings vision, deep experience, and great ability to the CBC, and we look forward to seeing her leadership firsthand.”

The CBC community looks forward to welcoming Dr. Hoffmann when she comes on board in August and working with her to develop and implement new initiatives that will foster entrepreneurship, encourage drug development, and strengthen collaboration within the Chicago biomedical ecosystem.