Understanding the mechanisms underlying intracellular trafficking of e.g., RNA, organelles or viruses is key to the understanding of many important biological processes such as cell signaling, polarity and cell division, and mechanisms of infections, just to name a few.

In a recent paper published in Nano Letters and entitled “Nanoscale Resolution 3D Snapshot Particle Tracking by Multifocal Microscopy,” the Scherer group at UChicago reports on the development of a novel multifocal microscopy (MFM) that allows tracking of fluorescently-labeled particles in live cells in 3D and with nanoscale resolution. Using several types of labeled particles, the authors first validate the system in liquid and gel-like environments in vitro. Then, they tackle live pancreatic islet β-cell clusters in culture to beautifully demonstrate 3D intracellular mobility of insulin granules. The new MFM system promises to be valuable in studies of many types of intracellular trafficking which were previously limited by technical difficulties such as a necessity of performing several scans in multiple 2D planes, photobleaching and introducing artifacts due to the repeated exposure to the laser beam, before a 3D reconstructed image stack could be analyzed.

Norbert Scherer, PhD, Professor at the Department of Chemistry at UChicago, acknowledges that “the project was initiated via a Catalyst Award from the Chicago Biomedical Consortium.” Scherer and his NU colleague, Oliver Cossairt, had received a CBC Catalyst Award in 2014 for the project “Development of a 3D Snapshot Holographic Microscope for Volumetric Live Cell Imaging.”

The CBC is pleased to have supported this promising development and congratulates all authors involved in the current study. 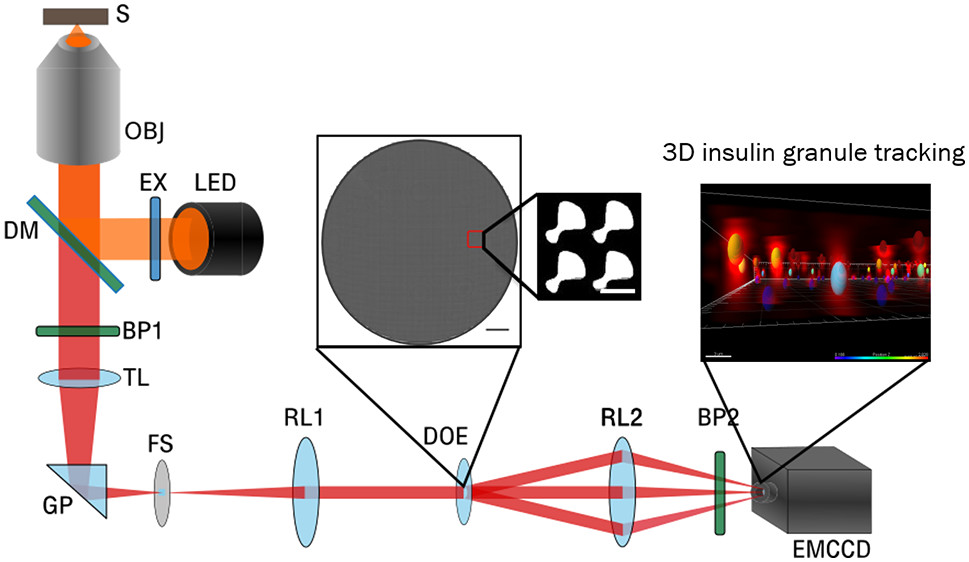 Accurate, precise, and rapid particle tracking in three dimensions remains a challenge; yet, its achievement will significantly enhance our understanding of living systems. We developed a multifocal microscopy (MFM) that allows snapshot acquisition of the imaging data, and an associated image processing approach, that together allow simultaneous 3D tracking of many fluorescent particles with nanoscale resolution. The 3D tracking was validated by measuring a known trajectory of a fluorescent bead with an axial accuracy of 19 nm through an image depth (axial range) of 3 μm and 4 nm precision of axial localization through an image depth of 4 μm. A second test obtained a uniform axial probability distribution and Brownian dynamics of beads diffusing in solution. We also validated the MFM approach by imaging fluorescent beads immobilized in gels and comparing the 3D localizations to their “ground truth” positions obtained from a confocal microscopy z-stack of finely spaced images. Finally, we applied our MFM and image processing approach to obtain 3D trajectories of insulin granules in pseudoislets of MIN6 cells to demonstrate its compatibility with complex biological systems. Our study demonstrates that multifocal microscopy allows rapid (video rate) and simultaneous 3D tracking of many “particles” with nanoscale accuracy and precision in a wide range of systems, including over spatial scales relevant to whole live cells.

We thank Prof. Sara Abrahamsson for helpful discussions. The project was initiated via a “Catalyst Award” from the Chicago Biomedical Consortium. This work was supported by funding through the Biological Systems Science Division, Office of Biological and Environmental Research, Office of Science, U.S. Department of Energy, under contract no. DE-AC02-06CH11357. This work made use of the Pritzker Nanofabrication Facility of the Institute for Molecular Engineering at the University of Chicago, which receives support from Soft and Hybrid Nanotechnology Experimental (SHyNE) Resource (NSF ECCS-1542205), a node of the National Science Foundation’s National Nanotechnology Coordinated Infrastructure. We also received a Big Ideas grant from the University of Chicago that partially supported this research.