Congratulations to Hossein Ardehali, NU, who is senior author on a recently published article in PNAS, ‘mRNA-binding protein tristetraprolin is essential for cardiac response to iron deficiency by regulating mitochondrial function.’ The authors describe their discovery of how cardiac cell mitochondria adapt to iron deprivation by lowering their basal metabolism, hence protecting the organ from shutting down. The findings have potential clinical implications in the treatment of heart failure. Ardehali is known in the CBC community as a co-recipient of one of the early CBC Catalyst Awards (2007), actually with another co-author on the paper, Paul Schumacker, also from NU. Schumacker received a second CBC Catalyst Award in 2009.

Image of mitochondria in heart cells after the levels of TTP (the master regulator of cellular iron conservation) are reduced.

Northwestern Medicine scientists have discovered a protective cellular mechanism that kicks in during iron deficiency, keeping cells running even in the face of continued iron deprivation, according to a study published in the Proceedings of the National Academy of Sciences.

The protein, called tristetraprolin (TTP), is activated during iron deficiency, and lowers iron usage to match availability and prevents mitochondrial dysfunction, according to Hossein Ardehali, MD, PhD, professor of Medicine in the Division of Cardiology and senior author of the study. 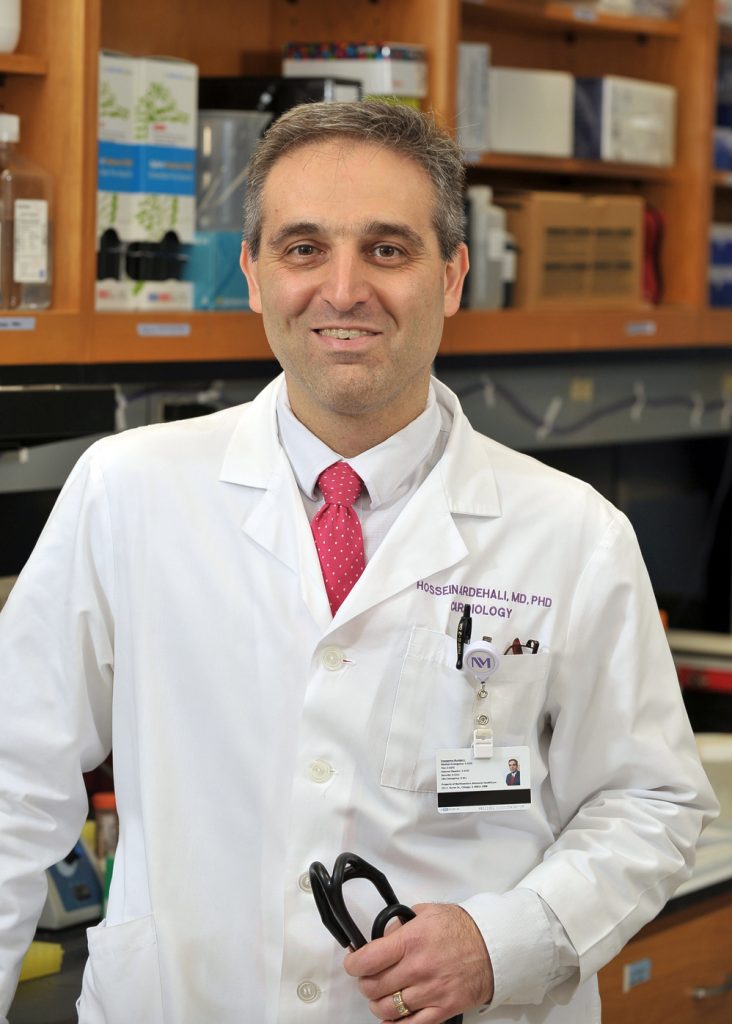 Hossein Ardehali, MD, PhD, professor of Medicine in the Division of Cardiology, NU and senior author of the study published in the Proceedings of the National Academies of Sciences.

Iron deficiency is the most common nutritional deficiency in the world, according to the study. When iron levels are low, cells activate proteins to increase iron uptake. However, it was unclear how cells respond when the expected iron never arrives.

To answer this question, Ardehali and his colleagues examined regulatory interactions between TTP and mitochondrial proteins. Ardehali’s group had previously found TTP to be upregulated in iron deficiency, so the scientists knew TTP played a part in the protective mechanism.

In the current study, investigators found TTP directly regulates a specific protein in complex III of the “mitochondrial electron transport chain,” a system which transports electrons through a chain of proteins and pumps out protons. If the mitochondria is an assembly line, complex III is in the middle of the process, transforming raw materials into parts required for manufacturing the end product: energy for the cell, in the form of ATP.

However, complex III requires iron in the form of iron-sulfur cofactor, and iron deficiency can cause it to stop working. In iron-deficient mitochondria without TTP, electrons are shuttled to complex III but left unused, causing electrons to leak into the intermembrane space of the mitochondria.

“If it’s like a factory belt, the parts are getting to complex III and then falling off the belt,” Ardehali said. “That causes damage because these leaked electrons can lead to production of reactive oxygen species, which can be toxic to the cell.”

To prevent this, TTP degrades a specific protein in complex III, which results in the lack of formation of an “apo-complex III” without the required iron-sulfur cofactor. This in turn results in less electron transport, less potential electron leakage and avoids production of toxic compounds.

“It’s not a complete shutdown of the mitochondria, this just makes them work less,” Ardehali said. “It’s using the iron more efficiently.”

These findings suggest that intravenous injections of iron — a clinical treatment that’s gained popularity in recent years — may be unnecessary, explained Ardehali.

“There is a new push to give intravenous iron to patients with heart failure, but it’s very expensive, has side effects and there’s no evidence it works better than over-the-counter oral iron,” Ardehali said. “This paper suggests a patient’s organs are protected in iron deficiency, so you don’t really need it — iron treatment only helps with symptoms of iron deficiency and doesn’t address the underlying problems of heart failure.”

Instead, Ardehali believes reducing mitochondrial iron in heart cells — using a chelator chemical that binds to mitochondrial iron and makes it unavailable — could treat patients with heart failure, with preliminary data to support the hypothesis.

“We’re working with our chemistry department to identify novel iron chelators to reduce mitochondrial iron in patients with heart failure,” Ardehali said. “We’re hoping at some point we will have a novel treatment.”

Ardehali is also a member of the Robert H. Lurie Comprehensive Cancer Center of Northwestern University.

Read about Ardehali and other cardiovascular investigators at Northwestern Medicine magazine.

Adapted (with modifications) from the Northwestern Medicine News Center, by Will Doss, published on July 19, 2018.