“The meat in the sandwich”—scale-like calcite matrices that could help affix biological tissues to medical implants developed by a UChicago team led by a CBC awardee, Bozhi Tian.

Congratulations to a 2014 CBC Postdoctoral Research Award recipient, Yucai Wang, who is the second and a corresponding author on a recent publication in Nature Communications: “3D calcite heterostructures for dynamic and deformable mineralized matrices.” Wang, currently a full professor at the University of Science and Technology of China, contributed to the published work during his postdoctoral studies in Bozhi Tian’s group at the Department of Chemistry, UChicago. Tian, the senior author on the paper, studies interactions between hard and soft materials at the molecular level, with a goal of utilizing them in applications in regenerative medicine. 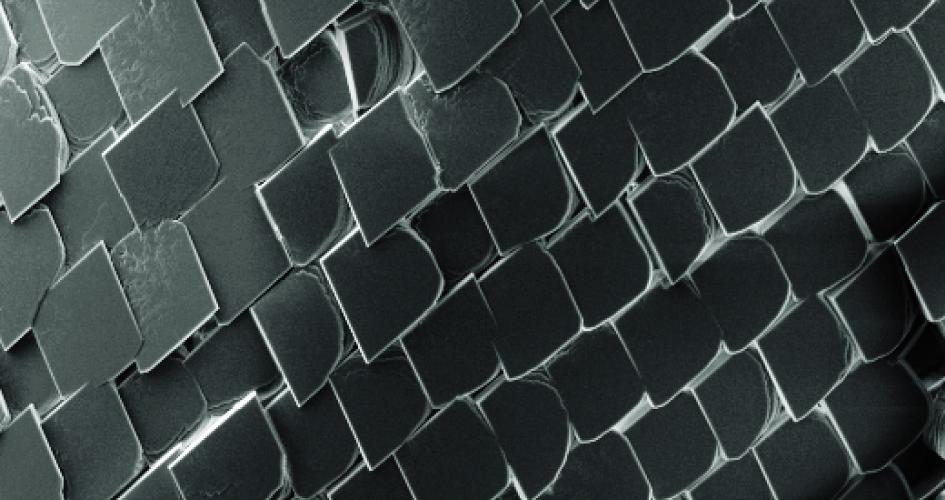 A scanning electron microscope picture shows the artificial “scales,” about a dozen of which could fit across the period at the end of a sentence.
Photo by Tian lab/University of Chicago.

Scales are the material of choice for animals from pangolins to fish: They’re customizable, water-friendly, strong but flexible, and easy to fix when damaged.

Scientists would like to recreate this unique structure—they can imagine uses from medical implants to flexible electronics—but it’s proved difficult using non-organic materials. But researchers with the University of Chicago have published a concept to use a naturally occurring mineral called calcite to “grow” scales that can attach to soft materials. The setup could one day serve as waterproof implants to reinforce bones or joints.

Currently surgeons use structures made out of synthetic polymers, but while they’re easy to sculpt, they can degrade over time. For a replacement, the UChicago team instead started with two materials that are compatible with the body. Silicone is a flexible, rubbery material often used in surgical implants because it doesn’t react with human tissue. Calcite is a common hard mineral that many clams and oysters use in their shells (brittlestars, related to starfish, use calcite in their eyes, as did ancient trilobites). Luckily, one of the specialties of Asst. Prof. Bozhi Tian’s chemistry lab is combining hard and soft materials at the molecular level. 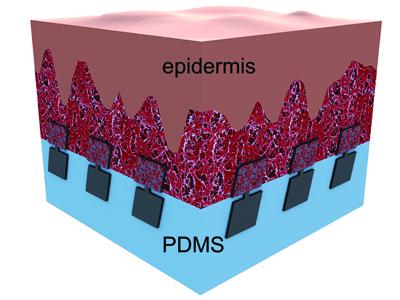 In a paper published last fall in Nature Communications, Tian and collaborators designed a system of minuscule two-ended hooks, made out of calcite, that can “grow” from silicone into tissue to fix themselves into place.

“Silicone alone won’t immobilize tissue components, and calcite alone is too stiff, but the combination of the two works very well,” Tian said. “The result is a structure that is both strong and flexible.”

The tiny structures, each about the size of a red blood cell, are shaped like dumbbells. One end hooks into the silicone; the other protrudes above the surface. The team tried laying a strip of lab-grown tissue on top. The dumbbells picked up calcium from the cells and grew into the tissue, affixing themselves in place.

One nice feature is that the implant could be crafted with “hooks” only in very specific places. “This method is particularly useful for biological adhesion, where you want to apply your glue very sparingly to avoid interfering in the body more than necessary,” said Jaeseok Yi, a postdoctoral scholar and the first author of this paper.

The research used X-rays and facilities at the Advanced Photon Source and the Center for Nanoscale Materials at Argonne National Laboratory.

Adapted (with modifications) from UChicago News, by Louise Lerner, posted on January 25, 2018.

CBC Postdoctoral Research Award(2014):
Yucai Wang (currently at the University of Science and Technology of China; at UChicago at the time of the award) and Bozhi Tian (UChicago) for the project:
▸ A Synthetic Biomineral Integrated with Silicon Nanowires