Joel Collier (UChicago), together with Chad Mirkin and Milan Mrksich (NU), and David Eddington (UIC) received a CBC Lever Award in 2010 for a project titled: Nanomaterials for Cancer Diagnostics and Therapeutics. The CBC Lever Award matched a National Cancer Institute (NCI) Award to help establish a collaborative network of Centers of Cancer Nanotechnology Excellence (CCNEs). Collier is a senior author on a paper, “Gradated assembly of multiple proteins into supramolecular nanomaterials”, that was published June 15, 2014 in Nature Materials and is attributed to the CBC Lever Award. The reported novel technology is likely to be utilized in a variety of biomedical applications such as diagnostics, vaccines and other therapeutics.

Synthetic biomaterials, and nanomaterials in particular, are extremely important as cargo-carrying vehicles, and are used in biomedical applications such as immunotherapy and drug delivery in cancer and other diseases. Nanomaterials are also used in the development of sophisticated biosensors and bioelectronics. Hence, there has been an urgent need to enhance existing nanotechnology and to develop new, reliable methods to easily and reproducibly engineer such nanostructures without compromising the biological activity of the integrated molecules, the “cargo.” 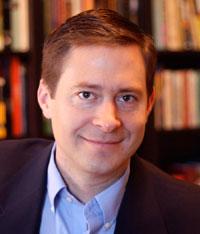 Joel Collier, PhD, (right) Associate Professor at the Department of Surgery, University of Chicago, has a long-standing interest in designing synthetic biomaterials that could be put to work to help regulate biological processes both in vitro and in vivo. Collier’s research group has been studying nanomaterials from many angles: from investigating their assembly processes to studying the interactions between nanomaterials and cells and tissues, both healthy and affected by pathological processes such as inflammation and immune responses. The ultimate goal has been to develop easily-generated, safe, and versatile nanostructures that are able to serve as controllable modulators of cellular responses.

In the paper, “Gradated assembly of multiple proteins into supramolecular nanomaterials”, Collier and colleagues describe such a novel methodology. The group produces synthetic nanofibers that contain highly titrated amounts of integrated peptides of choice, capable of maintaining their physiological function in biologically relevant environments. The system utilizes a synthetic polypeptide fragment called a “βTail”, which, when fused to a peptide of interest, facilitates easy expression and purification of the active peptide-βTail fusion protein. Moreover, the purified peptide-βTail fusion protein can be induced to co-assemble into nanostructures (fibrils) when mixed with another type of β-sheet fibrillizing peptides (see figure below). 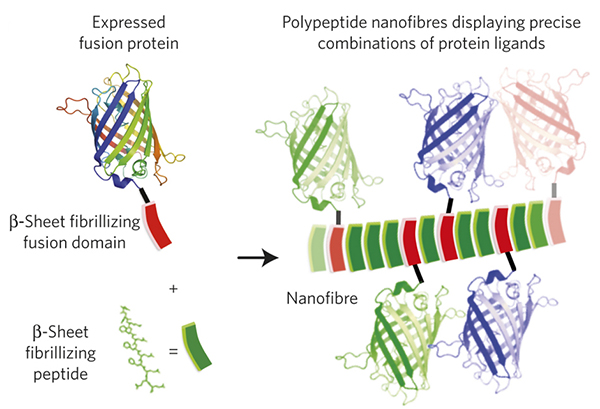 Collier and colleagues tested the system by fusing the βTail to several types of fluorescent proteins (such as GFP) and to another enzyme (cutinase). In both cases they observed a precisely gradated integration of the fusion proteins into the nanofibers without a significant loss of biological activity of the resulting nanostructures as measured by emitted florescence and enzymatic activity, respectively. In addition, the authors demonstrated that different fusion proteins could be inserted into the nanofibers alone or in mixed groups resulting in production of nanofibers with a highly controlled composition. When the nanofibers were injected into mice, they stimulated a higher immunological response than when the non-fused peptides were injected alone. Moreover, the antigenic response was tunable by titrating the composition of the nanofibers.

Taken together, the system developed by Collier’s group significantly enriches the existing repertoire of nanomaterials technology. It actually fits the bill quite well: it is easy to manipulate and control, and the manufactured nanomatrices contain properly folded and fully functional fusion proteins of choice in precisely stoichiometrical quantities. It is also versatile, as the nanofibers can be made multifunctional (i.e. they can have several types of cargo incorporated into the lattice). There is no doubt the system will be quickly exploited to aid in the development of multi-antigen polyvaccines. Other applications, such as fabricating biomatrices for 3D cultures and tissue engineering, drug delivery, and biomedical diagnostics, will also likely benefit from this novel methodology. The new “nano-toolkit” is ready for a variety of applications ranging from basic to clinical sciences.

“CBC played a pivotal role in supporting the development of this technology, by helping to establish the equipment infrastructure for producing and purifying the component peptides and proteins”, said Collier. “Now, that the platform has been developed, we are eager and ready to collaborate with other researchers in the Chicago area and beyond, applying these self-assembling nanomaterials to a wide range of biomedical problems.”