Congratulations to Eric Andersen, NU, whose scientific profile is featured in the NU Chemistry of Life Processes news! Andersen utilizes C. elegans as a model system to study mechanisms of drug resistance and mechanisms underlying individual phenotypic responses to therapeutics. His long-term goal is to develop a platform to screen for personalized medicine treatments. Andersen is a past CBC awardee: in 2014, he received a CBC Catalyst Award for the project: “Uncovering ‘Missing Heritability’ in Any Experimentally Tractable Model Organism.” 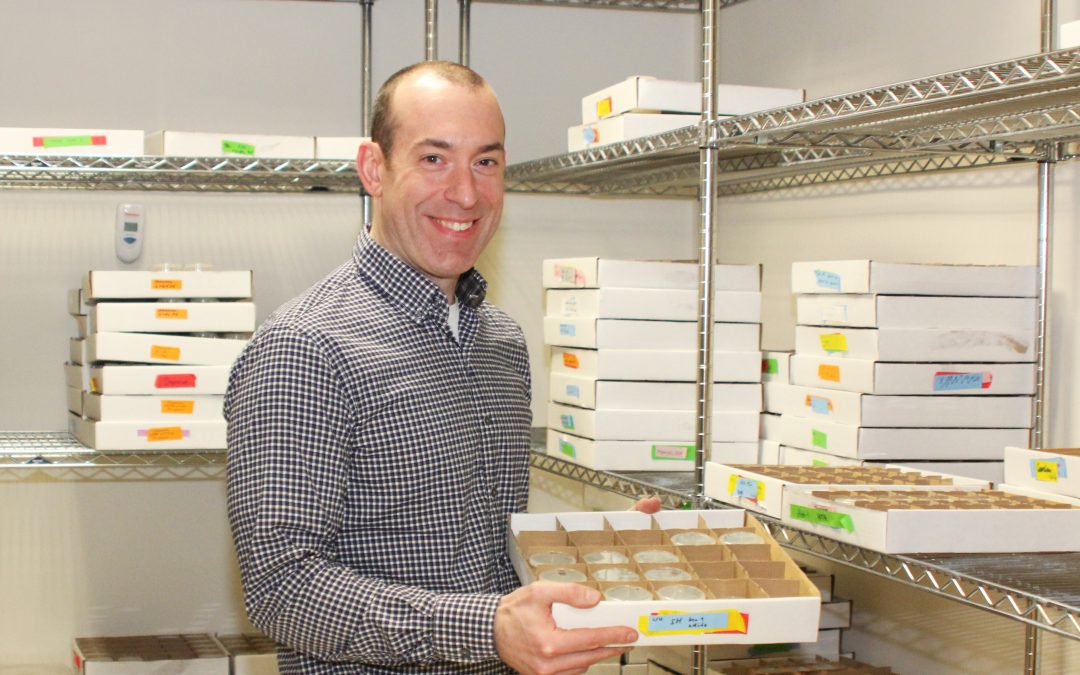 Parasitic nematodes, known commonly as roundworms, infect one-third of the world’s human population and are a threat to livestock and pets. There are only three general classes of anti-nematode (anthelmintic) drugs available to treat these parasites, and resistance to these compounds is growing. The gene(s) responsible for the resistance is largely unknown.

CLP faculty member Erik Andersen (molecular biosciences) and his collaborators have identified promising leads to the genes responsible for anthelmintic drug resistance. This feat would have not been possible without Andersen’s extensive catalogue of genetically diverse Caenorhabditis elegans – a harmless nematode.

Hundreds of genetically distinct C. elegans strains from around the world are catalogued and stored in Andersen’s laboratory. They happily live on petri plates, feed off bacteria, multiply, and are no larger than a period at the end of this sentence.

“We all know that genetic differences across the human population cause differences in how we look, act, and even how we respond to drugs. In order to understand those natural differences in drug responses across species, we need to look at more than just an individual or one strain within our experimental model systems,” states Andersen.

C. elegans are an ideal model system for large-scale studies. Using the tools of high-throughput assays and sequencing, Andersen can measure drug responses in thousands of genetically identical C. elegans nematodes across hundreds of genetically diverse strains. That’s similar to measuring drug responses in thousands of identical copies of a single person and then hundreds of different people.

His high-throughput assay platform allows him to measure effects of various agents quickly and accurately. This platform enables his team to assess the effects of 30 different treatment conditions in 96 independent strains per week. These assays strictly control for bacterial food, humidity, and temperature, eliminating much of the assay-to-assay variation and behavioral differences caused by standard agar plate assays.

The data generated from Andersen’s C. elegans platform enables him to predict phenotypic responses to drug treatment based solely on genomic data.

Andersen also uses C. elegans to model the relationship between genetic make-up and responses to various agents that humans are treated with, or exposed to, such as chemotherapeutics, neuroactive compounds, pesticides, and heavy metals produced by industrial processes.

Recently, he identified specific differences in a gene that encodes an enzyme that can alter an individual’s response to chemotherapy.

Andersen hopes that one day his research will lead to a C. elegans high-throughput platform for personalized medicine. He would like to use CRISPR methods to insert human genes into C. elegans to create models that could then undergo high-throughput testing to tailor the drug and dosage to the patients’ genome. Additionally, Andersen hopes to be part of a team that develops a genetic test to identify anthelmintic-resistant parasitic nematodes that infect humans and our livestock and identify new approaches to treatment.

Adapted (with modifications) from the NU Chemistry of Life Processes , published on May 30, 2018.