Kevin White is the recipient of the first CBC Senior Investigator Award (2006) which supported his recruitment to the University of Chicago as professor in the Departments of Human Genetics and of Ecology and Evolution and director of the then new Institute for Genomics and Systems Biology (IGSB). White is a senior author on a paper published March 20 in Cancer Cell, entitled “SPOP Promotes Tumorigenesis by Acting as a Key Regulatory Hub in Kidney Cancer. ” The paper provides important insights into the roles that hypoxia and a hypoxia-sensitive nuclear protein called SPOT play in the pathogenesis of human kidney cancer.

The shortage of oxygen, or hypoxia, created when rapidly multiplying kidney cancer cells outgrow their local blood supply, can accelerate tumor growth by causing a nuclear protein called SPOP — which normally suppresses tumor growth — to move out of the nucleus to the cytoplasm, where it has the opposite effect, promoting rapid proliferation.

In the March 20, 2014, issue of the journal Cancer Cell, researchers from Chicago and Beijing describe the mechanisms that enable hypoxia to cause the overexpression of SPOP. They show that hypoxia also stimulates the shuttling of SPOP out of the nucleus, where it normally prevents tumor growth, to the cytoplasm, where it shuts down protective pathways that should restrict tumor growth.

This cytoplasmic accumulation of SPOP, the authors note, “is sufficient to convey tumorigenic properties onto otherwise non-tumorigenic cells.” 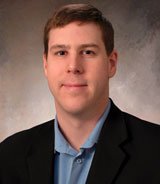 “It becomes a vicious cycle,” said the study’s senior author Kevin White, PhD, professor of human genetics, and ecology and evolution, and director of the Institute for Genomics and Systems Biology at the University of Chicago. “In people with clear-cell renal cell carcinoma, hypoxia-inducible factors enter the nucleus and target the SPOP gene. SPOP gets overexpressed and misdirected to the cytoplasm, where it interferes with multiple systems designed to suppress tumor growth. This encourages tumor growth, leading to more hypoxia.”

White and colleagues first recognized a role for SPOP (speckle-type POZ protein) as a biomarker for kidney cancer in 2009. They found that 99 percent of clear cell renal cell cancers (ccRCC, the most common type of kidney cancer) had elevated SPOP levels. So they began to study the connection between increased SPOP production and ccRCC.

Kidney cancer is a significant health problem. It is the eighth most common malignancy in the United States, causing almost 64,000 new cases in 2014 and nearly 14,000 deaths. Worldwide, it causes more than 200,000 new cases annually and 100,000 deaths.

The high mortality is linked to late detection. There are no good screening tests, so most kidney cancers are diagnosed late, only after there is blood in the urine. Approximately 30 percent of RCC patients in the U.S. have metastatic disease when first diagnosed and nearly half of the remaining 70 percent will develop metastases. The disease is highly resistant to chemotherapy.

Understanding how misplaced but not mutated SPOP contributes to cancer growth, the researchers hope, might point to new ways to intervene. Previous work from White’s laboratory on the fruit-fly version of SPOP suggested that it was a key regulatory hub, one that influenced several cancer-related pathways.

When the researchers shifted their focus from flies to human cancers they found that the high levels of SPOP in the cytoplasm had a profound effect. It degraded multiple regulatory proteins there that ordinarily served to suppress tumor growth. 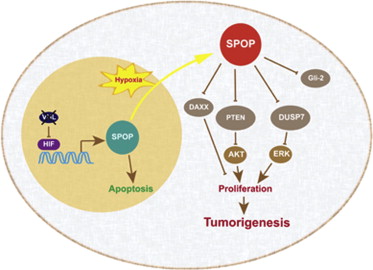 The most important was PTEN, a gene that is damaged or lost in several types of cancer. The researchers found that cells from tumor samples had consistently high levels of SPOP and low levels of PTEN. Normal tissues from the same patient had low SPOP and high PTEN. SPOP could also degrade several other tumor-suppressor proteins, removing additional barriers to rapid tumor growth.

“These results clearly demonstrate that SPOP is acting as a critical hub in a network involving multiple cancer-related pathways,” the authors wrote. “In doing so, SPOP appears to be both necessary and sufficient for tumorigenic phenotypes.”

“We found that this normal protein, found in the wrong place and acting in the wrong way, was sufficient to drive the formation of tumors,” White said. “Just by putting SPOP into the cytoplasm, we got great big tumors. But we also saw that the cells get addicted to it. When we knock it down, they die. Our hope is that cytoplasmic SPOP might turn out to be a good drug target.”