2018 Order of Lincoln Award bestowed on Dr. Louis Philipson, Professor of Medicine at UChicago and past CBC Spark Award recipient

In September 2017, the Illinois governor’s office announced that Dr. Louis Philipson, the Pediatrics Director of the Kovler Diabetes Center at UChicago, was to be awarded a prestigious 2018 Order of Lincoln Award. The Order of Lincoln Award honors public service for the betterment of humanity in Illinois and is the state’s highest civilian honor. The actual awarding ceremony took place last Saturday, May 5, 2018, at the Coronado Performing Arts Center in Rockford. Shortly before the 54th Order of Lincoln Convocation, Sarah Wolf interviewed Dr. Philipson for the Register Star. The interview is posted below. Philipson, together with his colleagues Graeme Bell (UChicago), Nissim Hay (UIC) and Joseph Bass (NU), were recipients of a 2011 CBC Spark Award. CBC joins in congratulating Dr. Philipson on this highly regarded award!

Dr. Louis Philipson names patients, colleagues among those who inspire him 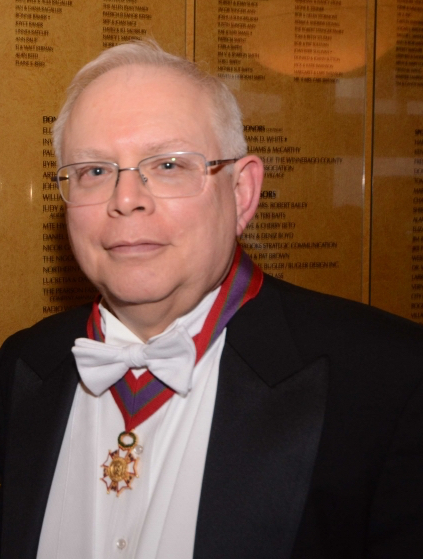 Eight new laureates will be inducted into the Lincoln Academy of Illinois in a ceremony to be held Saturday [May 5, 2018] at the Coronado Performing Arts Center in Rockford. The Register Star had the opportunity to question some of them about their life’s work and the meaning of the honor they’re about to receive.

Today: Dr. Louis Philipson, a world-renowned diabetes researcher and clinician at the University of Chicago.

Why did you decide to become a physician and medical researcher, specifically in the diabetes field?

As a young person I was interested in science, which gradually focused on biology, medical science and then diabetes. Partly this had to do with the people I met in medical school as teachers whom I later realized were an internationally respected group of diabetologists. They fostered my interest in endocrinology in part because of what I saw in the long-term relationships they had with their patients, as well as taking care of the whole person and often their families. The scientific problems were also compelling, and I became fascinated with the problem of how insulin gets made and released by the cells in the pancreas.

What has been your most important medical discovery and why?

I have had the good fortune to make several contributions to understanding insulin secretion, but the greatest impact has been in contributions to understanding the genetics of certain kinds of diabetes. This has led our group at the University of Chicago to be leaders in specific gene mutations that cause diabetes. We have established the largest registry for these disorders in the Unites States. With certain of these diabetes-causing mutations, we can help people stop taking insulin or, in fact, any drug at all. That is a great feeling and a vision of the future we hope for in diabetes research.

What is an aspect of diabetes and its side effects you wish society better understood?

The first issue may be that there are many kinds of diabetes. Most people might be aware of types 1 and 2, but our group is also interested in all the others, and there are many! For both type 1 and 2, a critical aspect is prevention. There are ways to possibly prevent some forms of type 2, but not type 1. If we had a better idea of why type 1 diabetes happens we might be able to prevent it. It looks like there are dozens of genes and causes of diabetes, so developing more insight into the causes should lead to both treatments and prevention. A common perception is that diabetes is somehow a condition that people get themselves into, and nothing could be further from the truth. Almost 30 million people in the United States have diabetes, yet research into prevention and cures is still insufficient. We could be preventing many cases of blindness, kidney failure and amputations right now if we did a better job of making diabetes education and treatment more affordable and more accessible. Now that I am president-elect of the American Diabetes Association I have a better sense of how important health care policy and the cost of medicine is for our whole society — and in many countries around the world.

What advice do you give patients and their families to help them stay positive in the midst of a diabetes diagnosis?

I often quote a friend and a patient who said, “Diabetes sucks,” and that is certainly true. The good news is that with the tools we have for both of the main types of diabetes — new understanding of diet, exercise, lots of new medicines and devices such as insulin pumps and glucose sensors — the future has never been brighter. The trick is to get more people to be able to afford these tools and more doctors educated to use them. There are simply not nearly enough diabetes doctors, nurses, dietitians and educators to treat everyone directly. Getting advice from the American Diabetes Association can really help people educate themselves and ask their doctors the right questions.

Is there any positive news on the horizon for those with diabetes, and if so, what?

There are many positive things on the horizon due to research, which is why many of us fight to be sure the federal budget for the NIH includes more funding for diabetes research. In the short term for type 1 diabetes, pumps and sensors get better every few months now. For type 2 diabetes, new classes of pills, injections and insulins improve sugars, cholesterol and blood pressure and for the first time can help with weight loss while decreasing heart attacks and strokes. On the distant horizon we continue to look for ways to prevent diabetes and come as close as possible to cures — stem cells, gene editing, implantable devices, smarter drugs — these are all being tested in laboratories around the world right now.

Who has inspired you, both personally and professionally?

My patients are a constant inspiration. Some of my colleagues have compared diabetes to how we remember the great dancer Fred Astaire, yet Ginger Rogers did everything he did, backwards and in high heels. People with diabetes often have to think about their blood sugars and insulin needs all the time, and one study suggested they are making 300 more decisions every day than folks without diabetes. Their struggle is inspiring. My teachers have also been a great source of inspiration, to see how they have overcome challenges and persisted in efforts to help their patients and also to make discoveries both large and small. I am also inspired by my students and try to learn from them, (as well as my) family and my own children. I have found inspiration in an idea called “radical amazement” — to never take our interactions with the world for granted and to never stop learning.

What was your initial reaction when you heard you were being named a Lincoln Laureate?

Disbelief — I thought it was a mistake.

What does the honor of being named a Lincoln Laureate mean to you?

The list of previous laureates is breathtaking. I am so very honored, after the initial shock, to be included in such a distinguished group of people who have been so honored. It is amazing to have my name linked with that of Abraham Lincoln, one of my heroes and one of our greatest presidents whose thoughtful, inspirational and eloquent leadership in the toughest of circumstances is sorely missed today.

Adapted (with modifications) from the Register Star, by Sarah Wolf, published on May 2, 2018.

▸ The Lincoln Academy of Illinois, Laureates Inducted in 2018