In a recently published PNAS article Time-resolved luminescence resonance energy transfer imaging of protein–protein interactions in living cells, the CBC Catalyst Team of Jerold Turner (UChicago) and Lawrence Miller (UIC) describe luminescence resonance energy transfer (LRET), a method of labeling and detecting proteins in living cells with a 50-fold higher sensitivity than current techniques. In LRET, one protein is labeled with a terbium complex that is characterized by an extended time span between light absorption and emission. The second protein is labeled with green fluorescent protein (GFP), which has a short emission lifetime. If the two different fluorescently-tagged proteins form a complex in vivo, the tags co-localize and can be microscopically visualized following excitation. The beauty of the system is that the detection of the terbium-sensitized GFP emission at long lifetimes effectively eliminates detection of cellular autofluorescence, unbound terbium probe luminescence and directly excited GFP. 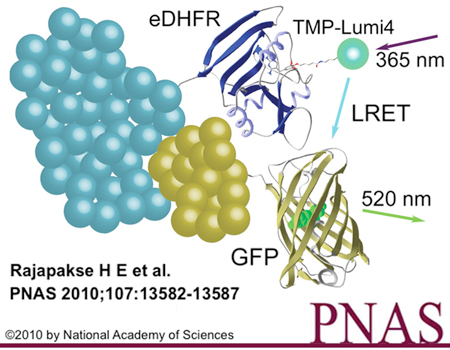 “With this new tool, we hope cell biologists and others will be able to study things they haven’t seen before, such as interactions that couldn’t be visualized in live cells in real time,” Miller said. “Hopefully the method will yield information that makes it easier to deduce biological mechanisms.” (Adapted from: New Tagging Technique Enhances View of Living Cells. ScienceDaily 4 August 2010).