Congratulations to Matt Lesniak and David James, NU, who have recently won a highly competitive SPORE grant from the National Cancer Institute (NCI)! The grant will fund a multifaceted research to improve treatment of the devastating and, in majority of cases, fatal brain tumor glioblastoma. The CBC has supported Lesniak’s glioblastoma treatment-related research in the past: he and his postdocs — Yu Cheng, Julius Woongki Kim and Megan Muroski — received CBC Postdoctoral Research Awards (2014, 2015 and 2016, respectively; for details please see below). The CBC is proud to have funded Lesniak’s research and to see the incredible progress he’s made, as demonstrated by being distinguished with this prestigious NCI grant. As Matt recently tweeted, ‘CBC support has been key to my endeavors!’ 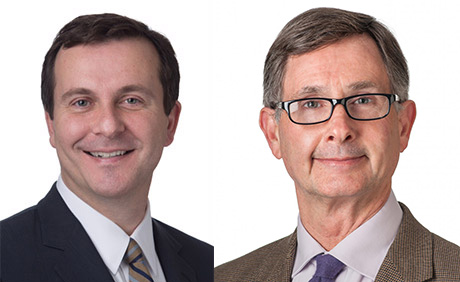 The SPORE, a highly competitive award from the National Cancer Institute (NCI), makes the Lurie Cancer Center one of just six brain tumor programs nationwide to receive this designation and recognizes Northwestern as a premier institution for innovative, translational research. SPORE grants fund interdisciplinary, collaborative research projects in specific cancer types and are intended to rapidly move research discoveries from the laboratory into the clinic.

The Lurie Cancer Center’s Brain Tumor SPORE will be focused on improving treatment for patients with glioblastoma, the most common and deadly type of brain tumor, with a median survival of just 15 months.

“The SPORE mechanism recognizes outstanding translational work in the field of cancer; in our case, brain cancer. We have gathered together leading investigators and clinicians in the world and are very fortunate to rank among the most prominent neuro-oncology programs in the country, allowing patients in Chicago and around the country access to novel and cutting-edge therapy for malignant brain cancer,” said Lesniak, also program leader for neuro-oncology at the Lurie Cancer Center.

The SPORE designation is the second for the Lurie Cancer Center. In 2015, the center received a renewed $11.3 million grant for its continued leadership of a SPORE in prostate cancer. The Prostate Cancer SPORE, first received in 2001, is one of only eight in the country.

“We have a critical mass of investigators in our brain tumor community who are uniquely focused on a specific brain cancer. Very few institutions in the country can match our depth and breadth of expertise,” said James, also director of the Lurie Cancer Center’s Developmental Therapeutics Core and the scientific director of The Northwestern Medicine Lou and Jean Malnati Brain Tumor Institute of the Robert H. Lurie Comprehensive Cancer Center of Northwestern University at Northwestern Memorial Hospital.

The grant will fund four key research projects in this area:

Each project will be co-led by a group of investigators with complementary expertise.

The SPORE also includes an administrative core, a biospecimen core and a biostatistics and bioinformatics core. A developmental research program will also enable future translational research, and a career enhancement program will facilitate the career development of early-stage investigators in the field of neuro-oncology.

“We’re excited about this prestigious award. This remarkable accomplishment reflects the exceptional leadership of Matt Lesniak and C. David James, who also oversee the research efforts of the Lurie Cancer Center’s Brain Tumor Program. The Program has benefitted tremendously from the support of the Lou Malnati Cancer Research Foundation, who recently made a transformative gift to our Brain Tumor Institute,” said Leonidas Platanias, MD, PhD, director of the Lurie Cancer Center and the Jesse, Sara, Andrew, Abigail, Benjamin and Elizabeth Lurie Professor of Oncology. “The strength of the science behind this award and the innovative research of our investigators will impact our patients today, tomorrow and for generations to come.”

Adapted (with modifications) from the Northwestern Medicine News, by Anna Williams, published on August 20, 2018.