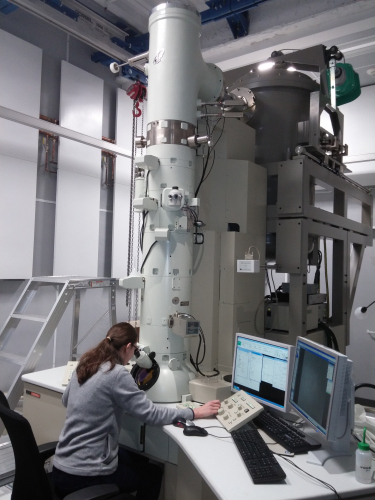 Congratulations to a team of NU scientists, led by Evan Scott, Associate Professor of Biomedical Engineering at the NU McCormick School of Engineering, on their recent publication in the journal Nanoscale, “Employing bicontinuous-to-micellar transitions in nanostructure morphology for on-demand photo-oxidation responsive cytosolic delivery and off-on cytotoxicity.” The publication reports on the development of an improved methodology for nanotherapeutics delivery.

The authors describe a procedure on how to engineer so-called “bicontinuous nanospheres” (BCNs) – a type of nanostructure that can easily transition between an assembled (nanospheres) and disassembled (micelle) states. During the process of the nanospheres’ self-assembly, BCNs can be “loaded” with a drug of choice, which becomes entrapped within the polymerizing structure. Following the administration of drug-loaded BCNs into a blood stream, the drug can become released “on target” in a precise and controlled manner by triggering the nanospheres’ disassembly (see graphic below). The authors assert that the type of nanospheres described in the paper is underutilized in medicine and deserves to be developed further as it has potential to improve treatment of many diseases, including localized cancers, or tumors, by facilitating spatio-temporal targeted delivery of chemotherapeutics.

Two CBC Awards are acknowledged in the publication, a CBC Infrastructure Initiative Award made to NU in 2014, and a CBC Spark Award made in 2009 to Thomas O’Halloran and Vinayak Dravid (NU), and Jonathan Silverstein (at UChicago back then) for the project “Support for an Innovative CryoSTEM for Element Specific Imaging of Cells and Tissue.” The Infrastructure Initiative Award-supported NU’s acquisition of a first-class sophisticated scientific instrument, namely the Gatan K2 direct electron detector, which was used in the current study. The Spark Award helped to establish the NU Center for Advanced Molecular Imaging (CAMI), where imaging work described in the paper was performed.

Worth mentioning is that the instruments and the facilities hosting them are available to all of CBC’s consortium members at “in house” costs as part of the Open Access Initiative initiated in 2014 with help and support from the CBC. The CBC is proud to have contributed to building an infrastructure in the Chicago area that is being continuously utilized to advance biomedical research exemplified by this report. 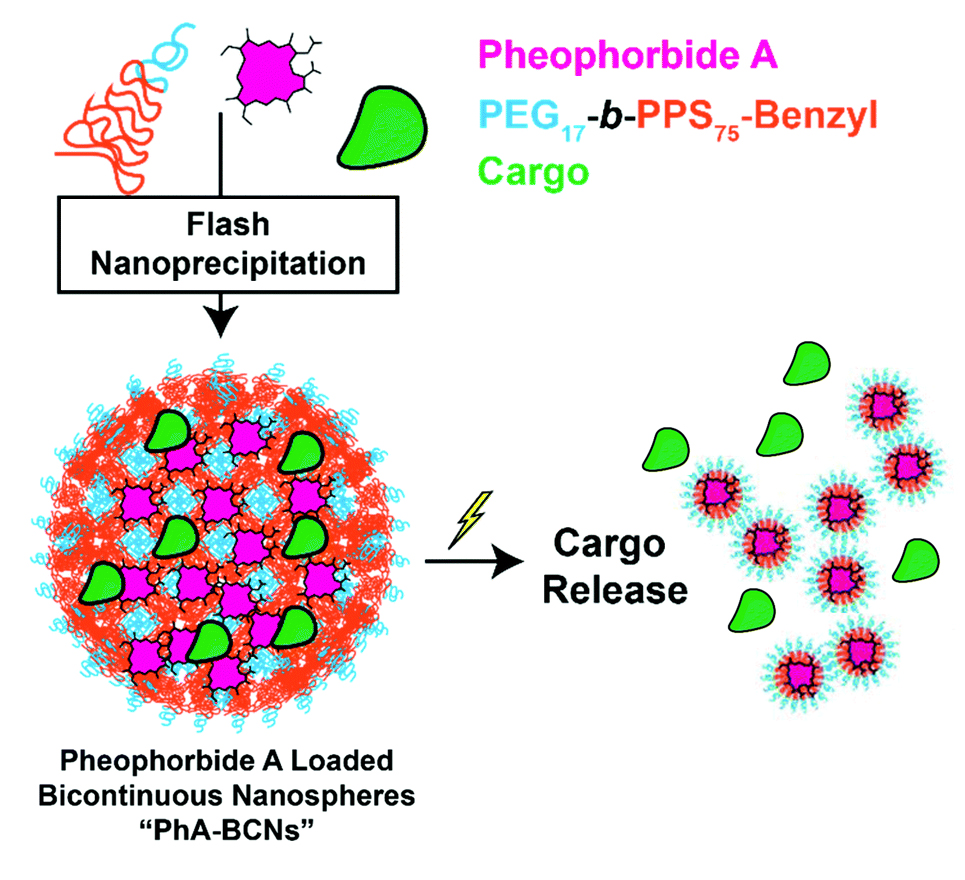 Bicontinuous nanospheres (BCNs) are underutilized self-assembled nanostructures capable of simultaneous delivery of both hydrophilic and hydrophobic payloads. Here, we demonstrate that BCNs assembled from poly(ethylene glycol)-block-poly(propylene sulfide) (PEG-b-PPS), an oxidation-sensitive copolymer, are stably retained within cell lysosomes following endocytosis, resisting degradation and payload release for days until externally triggered. The oxygen scavenging properties and enhanced stability of the bicontinuous PEG-b-PPS nanoarchitecture significantly protected cells from typically cytotoxic application of pro-apoptotic photo-oxidizer pheophorbide A and chemotherapeutic camptothecin. The photo-oxidation triggered transition from a bicontinuous to micellar morphology overcame this stability, allowing on-demand cytosolic delivery of camptothecin for enhanced control over off–on cytotoxicity. These results indicate that inducible transitions in the nanostructure morphology can influence intracellular stability and toxicity of self-assembled nanotherapeutics.

We acknowledge staff and instrumentation support from the Structural Biology Facility at Northwestern University, the Robert H Lurie Comprehensive Cancer Center of Northwestern University and NCI CCSG P30 CA060553. The *Gatan K2 direct electron detector was purchased with funds provided by the Chicago Biomedical Consortium with support from the Searle Funds at The Chicago Community Trust. SAXS experiments were performed at the DuPont-Northwestern-Dow Collaborative Access Team (DND-CAT) located at Sector 5 of the Advanced Photon Source (APS). DND-CAT is supported by Northwestern University, E.I. DuPont de Nemours & Co., and The Dow Chemical Company. This research used resources of the Advanced Photon Source, a U.S. Department of Energy (DOE) Office of Science User Facility operated for the DOE Office of Science by Argonne National Laboratory under Contract No. DE-AC02-06CH11357. This work made use of the EPIC facility of Northwestern University’s NUANCE Center, which has received support from the Soft and Hybrid Nanotechnology Experimental (SHyNE) Resource (NSF ECCS-1542205); the MRSEC program (NSF DMR-1121262) at the Materials Research Center; the International Institute for Nanotechnology (IIN); the Keck Foundation; and the State of Illinois, through the IIN. This work made use of the IMSERC at Northwestern University, which has received support from the NSF (CHE-1048773); Soft and Hybrid Nanotechnology Experimental (SHyNE) Resource (NSF NNCI-1542205); the State of Illinois and International Institute for Nanotechnology (IIN). This work was supported by the Northwestern University – Flow Cytometry Core Facility supported by Cancer Center Support Grant (NCI CA060553). Imaging work was performed at the Northwestern University **Center for Advanced Molecular Imaging generously supported by NCI CCSG P30 CA060553 awarded to the Robert H Lurie Comprehensive Cancer Center. This research was supported by the National Science Foundation (CBET-1806007 and CAREER Award no. 1453576), the National Institutes of Health Director’s New Innovator Award (NHLBI 1DP2HL132390-01), and the National Institute of Allergy and Infectious Disease (NIAID 1R21AI137932-01A1).

CBC Awards acknowledged in the publication: