“Modifications of RNA and DNA in health and disease” 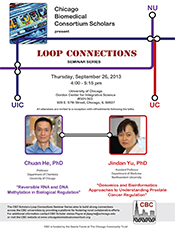 LOOP CONNECTIONS:
Modifications of RNA and DNA in health and disease

The 2013 Fall CBC Scholars “Loop Connections” seminar took place on September 26, 2013 at the University of Chicago. The seminar featured Dr. Chuan He, Department of Chemistry, UChicago and Dr. Jindan Yu, Department of Medicine, NU.  Over 110 students, faculty and staff from the three CBC universities attended the event.  Prior to the public seminar, the Scholars organized a data-sharing session for members of Dr. He’s and Dr. Yu’s research teams to further bolster the seminar series’ mission of promoting collaboration.  Angela Yang, a graduate student from Dr. Yu’s lab, enthusiastically supported the addition of this session for students and fellows: “I think it was a good opportunity for members from labs of different backgrounds to come together and exchange interesting research ideas. The small audience size provided a comfortable non-intimidating environment for discussion.”

UChicago CBC Scholars, James Payne, Michael Werner and Michelle Boland, hosted the event.  Following Michael’s brief description of the CBC Scholars Program, James and Michelle introduced the speakers and moderated the question and answer session that concluded the seminar. Dr. He presented a talk titled “Reversible RNA and DNA Methylation in Biological Regulation” in which he discussed how the modifications of the nucleic acid nitrogenous bases contribute to creating an additional layer of information storage in both, DNA and RNA. In the case of DNA, Dr. He discussed the TET family oxidases, which are involved in the conversion of 5-methylcytosine (5mC), an altered form of cytosine, to 5-hydroxymethylcytosine (5hmC), a recently discovered variant. Dr. He then spoke about the modification of adenosine in mRNA and its effects on mRNA stability and storage. It has been proposed, in the context of RNA epigenetics, that adenosine modification plays a role in gene regulation and development. Dr. He presented data supporting this hypothesis, including identification of proteins, which specifically recognize methylated RNAs and transmit the modified mRNA transcript.

Dr. Yu gave a presentation on “Genomics and Bioinformatics Approaches to Understanding Prostate Cancer Regulation.” She spoke about recent advances in her lab geared towards understanding of the role of the androgen receptor (AR) in the different stages of prostate cancer progression. AR is a well-established focal point of prostate cancer development, and Dr. Yu’s lab found that it functionally interacts with a known epigenetic transcriptional repressor, thereby identifying an important member of the AR-induced oncogene network. In addition, Dr. Yu’s lab identified a potential mechanism of AR regulation by the FOXA1 transcription factor, which appears to restrict the genes targeted by AR through local changes to chromatin accessibility. Both of these findings contribute to our understanding of the genetic and epigenetic regulation of prostate cancer.

A post-seminar reception provided an opportunity for the CBC Scholars to interact with the invited speakers and their lab members. Many lively conversations took place over dinner.  Topics included post-doctoral job searches, upcoming conferences, and prospective collaborative projects between the Drs. Yu and He laboratories, such as analysis of diagnostic magnetic resonance (DMR) potential tool in prostate cancer diagnosis and prognosis, and obtaining a genome-wide high-resolution 5hmC map of prostate cancer.  The event was deemed a success and a great learning experience.  Hongjian Jin, PhD, a member of Dr. Yu’s lab, summed up the meeting, “…the “Loop Connections” seminar provided us a very good chance to present recent data, discuss scientific questions and learn a lot from each other. It definitely further fostered collaboration between the two groups.”

PHOTOS: The Fall 2013 CBC Scholars “Loop Connections” Seminar: “Modifications of RNA and DNA in health and disease.” From the left: Dr. Yu and Dr. He chatting in front row before the seminar. The seminar at UChicago was attended by over 110 people. Standing are (from left to right): CBC Scientific Director, Shohei Koide, CBC Scholars: James Payne, Michelle Beaton and Mike Werner, and the seminar speakers, Dr. Yu and Dr. He. (Photos: CBC)