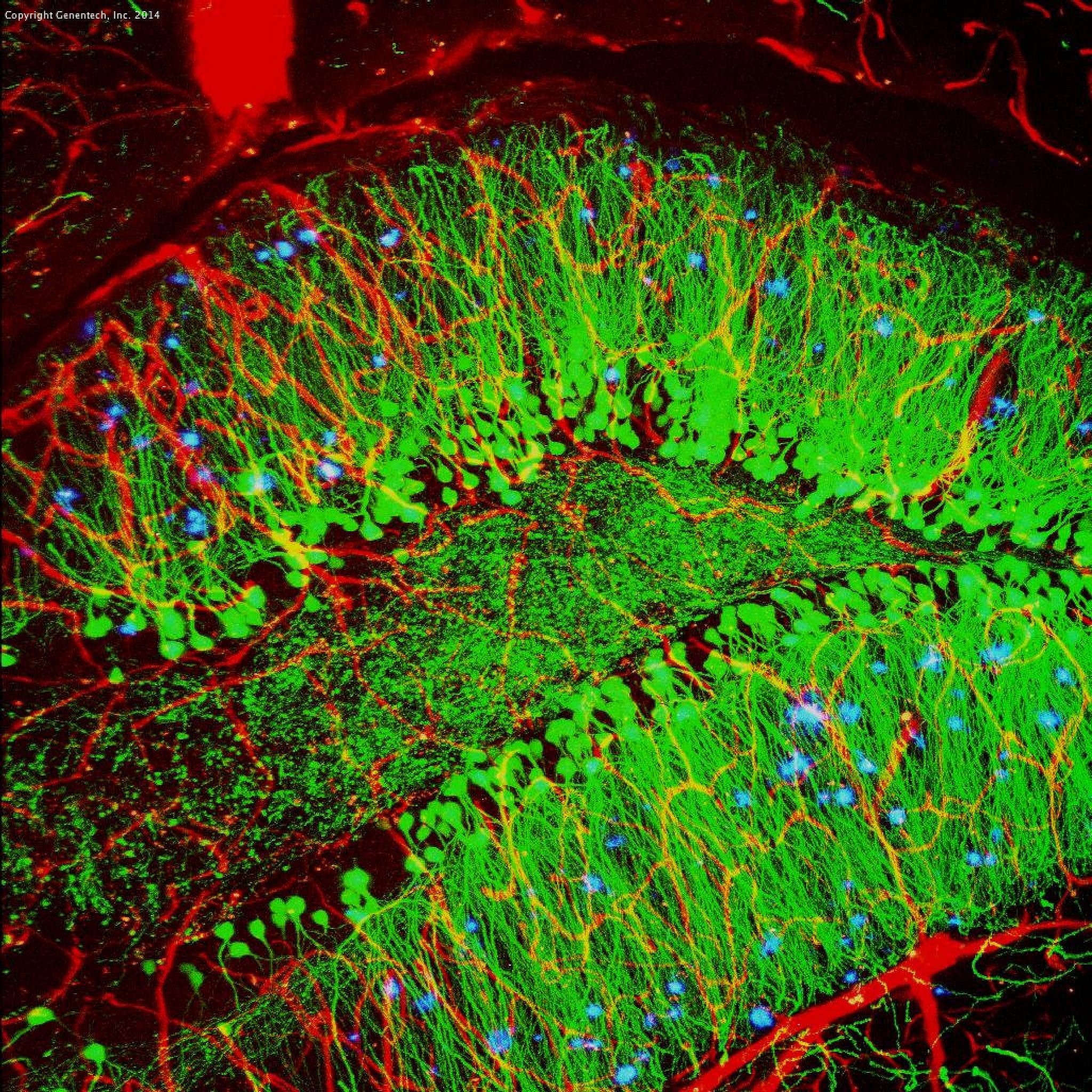 Brain showing hallmarks of Alzheimer’s disease. Along with blood vessels (red) and nerve cells (green), this mouse brain shows abnormal protein clumps known as plaques (blue). These plaques multiply in the brains of people with Alzheimer’s disease and are associated with the memory impairment characteristic of the disease. Because mice have genomes nearly identical to our own, they are used to study both the genetic and environmental factors that trigger Alzheimer’s disease. Experimental treatments are also tested in mice to identify the best potential therapies for human patients. Credit: Alvin Gogineni, Genentech. Source: www.nigms.nih.gov

Earlier this month (Feb. 2018), FDA published draft guidance representing their evolving position on the development of therapeutics for the early stages of Alzheimer’s Disease (AD). The guidance document is relatively concise (only 7 pages) and I think should be required reading for those involved in any component of the AD/neurodegeneration drug discovery/development endeavor. The outline consists of a brief introduction, some important background which outlines some of the current FDA thinking, diagnostic criteria for early Alzheimer’s Disease, and finally outcome measures, including clinical endpoints for early AD trials across the patients in Stage 3, 2, and 1, consideration of ‘time-to-event’ analyses and assessment of disease course.

While this is still draft guidance and subject to further modification during the required 90-day review process, an important component of the revised position from FDA is a rejection of the historical dichotomy of functional and cognitive assessment in AD clinical trials, arguing that it implies ‘that an effect on cognition itself, regardless of the nature of the observed effect and the manner in which it is assessed, cannot be clinically meaningful. This is certainly not the case.’ Importantly, the FDA acknowledges that ‘cognition is meaningful, but when measured using conventional approaches with sensitive tools directed at particular domains, the meaningfulness of measured changes may not be apparent.’ As a result, significant effort has been expended to incorporate biomarkers ‘reflecting underlying AD pathophysiological changes’ into clinical trials, an effort of particular importance as intervention has now become increasingly focused on treatment of (or the evaluation of therapeutics in patients with) stages of the disease that ‘greatly precede the development of clinically evident findings’.

In their draft guidance document, FDA ‘supports and endorses the use of diagnostic criteria that are based on a contemporary understanding of the pathophysiology and evolution of AD.’ This understanding includes the progressive nature of the disease in which ‘physiological changes of AD greatly precede the development of clinically evident findings and progress as a continuous disease through stages defined initially only by those physiological changes and then by the development of subtle abnormalities, detectable using sensitive neuropsychological measures. These are followed by the development of more apparent cognitive abnormalities, accompanied by initially mild and then more severe functional impairment.’

Within this understanding, ‘the following categories are conceptually useful for the design and evaluation of clinical trials in different stages of AD’:

For outcome measures, the guidance begins with consideration of clinical endpoints for early AD trials in Stage 3 Patients and an important acknowledgement that ‘Many of the assessment tools typically used to measure functional impairment in patients with overt dementia may not be suitable for use in these early stage patients.’ For that reason ‘FDA encourages the development of novel approaches to the integrated evaluation of subtle early AD (predementia) functional deficits/impact that arise from early cognitive impairment’ and suggests that an acceptable approach could include ‘independent assessment of daily function and cognitive effects.’ They caution against reliance upon ‘sensitive measure[s] of neuropsychological performance of uncertain independent clinical meaning’ as a means of supporting a finding of efficacy, and further emphasize the importance of cognitive assessment for drugs with ‘potential for measurable functional benefit without a corresponding cognitive benefit.’

Patients with Stage 2, the earliest clinical stage of AD, create an additional assessment challenge since only ‘subtle cognitive deficits detected on sensitive measure of neuropsychological performance are present, and there is no evidence of functional impairment’. One approach to be considered is that of monitoring the transition to Stage 3 (thereby applying the appropriate Stage 3 assessment criteria) in a trial of sufficient duration. Even in the absence of impact on function, FDA expresses its willingness to consider ‘strongly justified arguments that a persuasive effect on sensitive measures of neuropsychological performance may provide adequate support for a marketing approval.’ In such a case, robust changes in these measures would be bolstered by ‘similarly persuasive effects on the characteristic pathophysiologic changes of AD’, showing perhaps a new willingness to more strongly consider biomarker-based arguments.

Acknowledging both the desirability of early intervention in the non-symptomatic Stage 1 AD patients and the inability to demonstrate meaningful clinical benefit in these patients who have ‘no clinical impairment to assess’, the guidance document outlines a basis, in principle, for an accelerated approval based on biomarker effects if the ‘biomarker effects would be found to be reasonably likely to predict clinical benefit, with a post-approval requirement for a study to confirm the predicted clinical benefit.’ This position is both important and problematic, as the guidance recognizes, that despite extensive research interest and investment in AD, ‘there is unfortunately at present no sufficiently reliable evidence that any observed treatment effect on such biomarker measures would be reasonably likely to predict clinical benefit.’ So where does this leave biomarkers as a path to accelerated approval? My reading suggests that this is a forward-looking view intended to further encourage such studies to better validate existing and additional biomarkers and to ‘analyze the results of these biomarkers independently, though in a prespecified fashion, with the understanding that these findings will be interpreted in the context of the state of scientific evidence at the time of a future marketing application.’