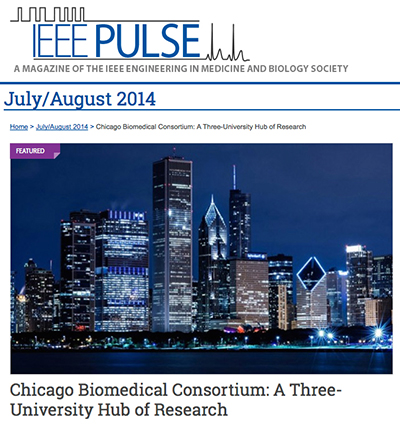 When someone thinks about Chicago, the first thing that comes to mind might be its picturesque skyline on the shores of Lake Michigan; its tantalizing Chicago-style hotdogs or deep-dish pizza; its amazing assemblage of museums; its stunning architecture; or one of its three major research institutions. The Chicago Biomedical Consortium (CBC) is now starting to draw its share of the limelight, too, as a hotbed for biomedical research.

Although it had its official start less than a decade ago, the CBC, a joint enterprise of Chicago’s major research universities, has amassed an impressive collection of statistics. It has provided about $30 million in grants to some 100 research groups. Those groups have not only produced more than 800 peer-reviewed papers, but have also generated an additional $275 million in federal and other non-CBC funding. In addition, the consortium has supported more than three dozen outstanding students as CBC Scholars.

The CBC’s origins can be traced to a 2001 challenge issued by philanthropist Dan Searle. “He asked leading faculty members at Chicago’s three major research universities—Northwestern, the University of Chicago, and the University of Illinois at Chicago—to figure out a way that they could use a substantial amount of funding to really strengthen the Chicago research enterprise,” recalls Kathryn C. Stallcup, Ph.D., executive director of the CBC. Extensive brainstorming led to a planning grant and demonstration project that ultimately landed a generous infusion of monies from the Searle Funds at The Chicago Community Trust in 2006.

Since then, researchers from multiple disciplines have received CBC funding to start new biomedical projects. At the same time, scientists and engineers from the three research universities began developing strong cross-institution relationships. In May 2014, that collaborative spirit enveloped facilities with the announcement of a new Open Access Initiative, which makes the entire suite of core facilities at the three campuses open to users from the partner universities.

“Before the initiative came into being, if you were an investigator at Northwestern and wanted to use the next-generation sequencing facility at the University of Chicago, for instance, you would have to pay what it costs to run the samples and do the experiment, and you’d also have to pay the overhead/facilities-and-administration additional charges which can tack on an additional 50 percent. Now, those extra charges have been waived,” Stallcup says.

The CBC has also added summer workshops (this summer’s workshop is on proteomics and informatics), and an annual symposium. The 2014 symposium is titled “Protein Engineering: From computers to cells to clinic,” and will be held 17 October on the University of Illinois at Chicago campus.

In the CBC’s nine short years, Stallcup says, “We now have a wonderful sense of cooperation between the three universities that really is the rule rather than the exception.” That even extends to the technology transfer and development offices. The universities’ tech transfer offices work together on a number of joint programs that have fostered entrepreneurship and commercialization, and the development offices have undertaken some cooperative work, she says. A healthy competition still exists between the three universities, but it has become tempered by a new perspective, she says. “There’s a deep recognition now that there are plenty of ways that the universities can all benefit from working together, that the whole is greater than the sum of the parts. That’s definitely one of the many cool things about the CBC.”

More information about the Chicago Biomedical Consortium and the varied research projects it has supported is available on the CBC website.