CBC Accelerator Award winner and founder of the Pitch Perfect-winning startup Enzyme By Design, Arnon Lavie, UIC, explains what’s in the company pipeline and what challenges it may face

Congratulations again to Arnon Lavie, UIC, whose company called Enzyme By Design won first place in the 2019 MedCity INVEST Pitch Perfect Startup Contest, BioPharma category. In the article below, Arnon introduces his team members, provides history behind the company’s establishment and talks about the company’s main anti-leukemia drug that is currently in the pipeline and will, hopefully, enter the clinical phase soon. Arnon discusses other potential uses of the drug in the treatment of different cancer types as well as what else “is cooking” in the lab.

Among the early sources supporting his company’s development was a CBC Accelerator Award of $100,000 that Lavie received in 2018 for the project: “Increasing the in vivo Stability of L-asparaginase through Interactions with HSA.” The CBC is proud to have supported such a medically important entrepreneurial activity in Chicago.

A small company is working on a big discovery.

Enzyme By Design (EbD), a University of Illinois at Chicago spinoff formed out of research conducted in the laboratory of University of Illinois Cancer Center member Arnon Lavie, professor of biochemistry and molecular genetics, is developing a chemotherapeutic drug for the treatment of adult acute lymphoblastic leukemia (ALL), an orphan indication. The company recently won the best pitch in the biopharma category at MedCity INVEST, the Midwest’s premier national healthcare investing conference. 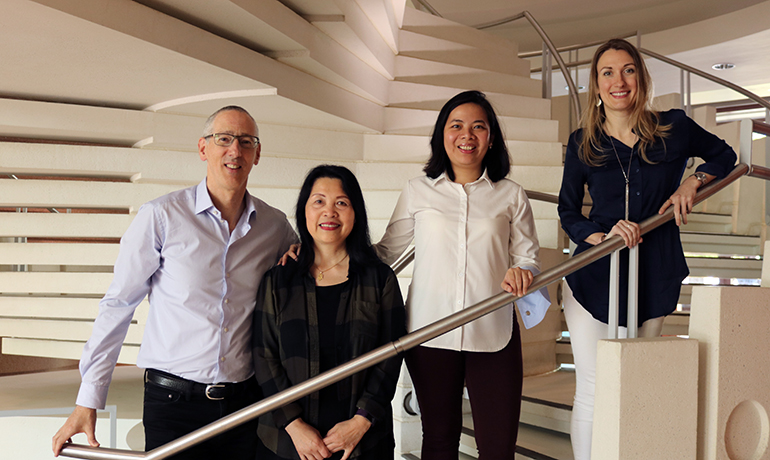 Enzyme By Design is developing EbD-1117, a therapy that builds upon the established science of depleting asparagine from the blood to starve cancer cells. Cells need asparagine for basic cell functions. The biologic, said Schalk, helps patients with ALL achieve cancer remission without toxic side effects of current therapies.

“EbD-1117 will fill the unmet need for a safer, efficacious therapeutic for adult ALL in the large U.S. market, followed by Europe and Japan,” Schalk said. “Use in the adult ALL population will provide broad proof-of-concept for expanding L-asparaginase therapy to pancreatic cancer and triple negative breast cancer.”

Lavie pitched the strategy behind developing EbD-1117 at the MedCity INVEST conference, and the three-judge panel were so impressed they awarded EbD the best pitch. In addition, Lavie met with several companies and investors during the event in an attempt to secure more funding that will be used to begin a Phase I clinical trial.

The company, said Lavie, was initially a “one-trick pony” as it had only one molecule in development. At the urging of UIC’s Office of Technology Management (OTM), EbD began to expand its pipeline. It now has two cancer therapeutic molecules – which Lavie said he is most excited about – in the pre-clinical stage with others in the discovery stage.

“Our main focus at the present time is to advance our most-developed assets to conduct Investigational New Drug (IND)-enabling studies,” Lavie said. “The challenge we are facing is financial, as an IND costs between $2 million to $4 million per compound. We are exploring funding options from both non-dilutive – such as small business grants from the National Institutes of Health – and dilutive – grants from angel grants and venture capital – agencies.

“This is why we are elated – and humbled – at our success at the MedCity INVEST pitch. The win comes without direct financial prize, but it brings something more valuable: validation of our technology and strategy, and exposure to venture capitalists.”

Without having to raise dilutive money, EbD has garnered about $600,000 to fund the research that will develop EbD-1117. Lavie received two phase 1 Proof Of Concept (POC) grants and was awarded a Phase 2 grant totaling $150,000. He then won a Chicago Biomedical Consortium Accelerator award presented by the Searle Freedom Trust* for translational research amounting to $100,000. In 2018, Nguyen and the team successfully secured two Small Business Technology Transfer (STTR) grants (also known as America’s Seed Fund, one of the largest sources of early-stage capital for technology commercialization in the U.S.) from the NIH, each for $300,000 to develop EbD’s two pre-clinical biologic candidates.

ALL is a deadly blood cancer that begins in the bone marrow and results in uncontrolled tumor growth. About 2,500 adults are diagnosed with ALL annually, and 60 percent will die from the disease. Adults represent 85 percent of ALL deaths.

L-asparaginase therapy is the best ALL treatment, and currently there are two drugs – Oncaspar, marketed by Servier, and Erwinaze, Jazz Pharmaceuticals – on the market used to combat the disease. Both drugs account for $500 million in global sales. However, the FDA-approved enzymes have high levels of toxicity because they contain glutaminase, which has been linked to toxic side effects such as pancreatitis, liver abnormality and coagulation problems.

In prior research conducted in Lavie’s laboratory, Nguyen discovered the required combination of mutations in Erwinaze so that it could still hydrolyze aspargine but not glutamine. By crystallizing the Erwinase in combination with either asparagine or glutamine, Nguyen found how they both specifically worked, and identified sites on the proteins that could be modified. In a paper published in the journal Cancer Research, Nguyen and her collaborators reported that by reducing the amount of glutaminase within asparaginase results in a drug that is highly effective against both T and B cell ALL, while reducing the toxicity.

Based on that data, EbD decided to pursue the development of EbD-1117, an improved version of L-asparaginase from guinea pig that was identified by Schalk. EbD-1117 is the first L-asparaginase of mammalian origin with clinically relevant L-asparaginase activity while having no trace of the toxic side effect causing L-glutaminase activity. “These two precious features hold EbD-1117 a promising best-in-class asparaginase that overcomes the toxicity limitations present in current commercialized products,” Nguyen said.

Preclinical data shows L-asparaginases works effectively not only in ALL but holds potential in solid tumors such as pancreatic and triple negative breast cancer. Pancreatic cancer threatens the lives of more than 340,000 patients worldwide. It has a five-year survival rate of less than 5 percent, with a median survival rate of only six months following diagnosis. The disease accounts for about 331,000 deaths per year.

Lavie’s father, Avi, was a successful international businessman in his native Israel, and Arnon initially wanted to follow in his footsteps. His father said the business world could wait, that he should study something he has a passion for. So Arnon became a scientist, and today, like his father, he’s also a businessman.

“It’s been a thrilling experience co-founding and running EbD,” Lavie said. “I am so proud of our team. Amanda, Hien Anh and Ying have made the rapid success of our startup possible. We are united in our determination to bring safe and effective drugs to cancer patients.”

Source:
Adapted (with modifications) from the University of Illinois Cancer Center, by Courtney Colvin, published on May 28, 2019.