The novel spherical nucleic acid (SNA) drug, developed by Chad Mirkin and Alexander Stegh of Northwestern University for use against the deadly brain cancer, glioblastoma, is shown in early clinical trials to penetrate the blood-brain barrier and trigger the death of tumor cells in humans. 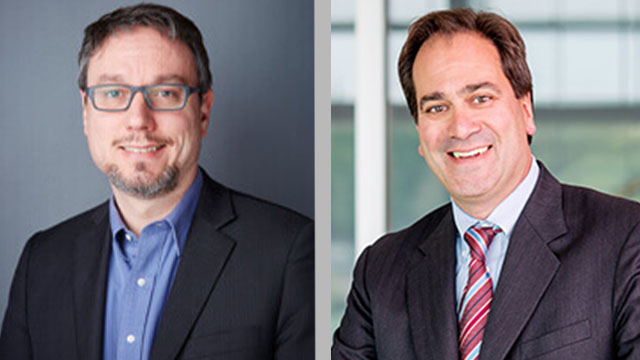 Associate Professor of Neurology Alexander Stegh, NU (left) and Director of the International Institute for Nanotechnology and the George B. Rathmann Prof. of Chemistry Chad Mirkin, NU (right).

Alexander Stegh is Associate Professor of Neurology
(Neuro-oncology) and Medicine (Hematology and Oncology)
at Northwestern University Feinberg School of Medicine and
Chad Mirkin is the Director of the International Institute for Nanotechnology and the George B. Rathmann Prof. of Chemistry, Prof. of Chemical and Biological Engineering, Prof. of Biomedical Engineering, Prof. of Materials Science & Engineering, and Prof.
of Medicine at Northwestern University. The team developed the SNA platform technology and drug at the Center of Cancer Nanotechnology Excellence. The Center was initially funded by the National Cancer Institute (U54 CA 151880 and U54 CA 199091) and the 2010 CBC Lever awarded to Chad Mirkin and Milan Mrksich (NU), David Eddington (UIC) and Joel Collier (UChicago) for the project: “Nanomaterials for Cancer Diagnostics and Therapeutics.”

The nanotherapeutic is a spherical nucleic acid (SNA) drug with a unique 3D design consisting of a nanoparticle surrounded by nucleic acids. The drug crosses the blood-brain barrier and causes tumor cells to undergo apoptosis. Glioblastoma is a fatal brain tumor which affects thousands of patients annually in America; no effective treatment is available for this deadly brain cancer. Initial clinical trials with patients having recurrent glioblastoma showed that small doses were not harmful to humans and the drug did cross the blood-brain barrier. A new class of drugs using the SNA platform could be applied to other types of neurological diseases including Alzheimer’s and Parkinson’s by crossing the blood-brain barrier and targeting tumor cells associated with those diseases.

Congratulations on such an exciting development!

The feature article written for the Northwestern Now by Marla Paul is reposted below. Enjoy! 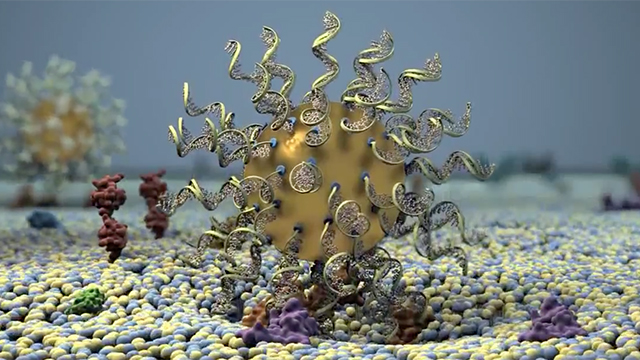 An early clinical trial in individuals with the deadly brain cancer, glioblastoma, showed an experimental spherical nucleic acid (SNA) drug developed by Northwestern University scientists was able to penetrate the blood-brain barrier and trigger the death of tumor cells.

“We showed the drug, NU-0129, even at very small doses, causes tumor cells to undergo what’s called apoptosis or programmed cell death,” said lead investigator Dr. Priya Kumthekar, an associate professor of neurology at Northwestern University Feinberg School of Medicine and a Northwestern Medicine physician. “It’s a remarkable finding in humans that confirms what we had previously seen in our animal studies.”

Now Northwestern scientists plan to use this technology to advance this type of therapeutic for brain tumor care.

The phase 0 study was conducted with eight individuals who had recurrent glioblastoma at the Robert H. Lurie Comprehensive Cancer Center of Northwestern University. In phase 0, investigators use a small dose of medication to make sure it isn’t harmful to humans before they start using it in higher doses in larger clinical trials.

Study participants received the drug intravenously prior to surgery. Following tumor removal, Kumthekar and her team studied the tumors to determine how well the drug crossed the blood-brain barrier and its effect on the tumor cells.

Glioblastoma affects approximately 13,000 to 15,000 patients each year in the United States and is uniformly fatal. There have been no new drugs approved for glioblastoma in the past decade. Scientists said it’s been hard to develop a drug that can breech the protective blood-brain barrier and reach the highly aggressive brain tumor.

“This unique 3D design has the ability to infiltrate tumor cells to correct the genes inside and make them susceptible for therapy-induced killing,” said senior author Alexander Stegh, an associate professor of neurology at Northwestern.

NU-0129 is the first SNA drug developed for systemic use. SNAs are structures consisting of DNA or RNA arranged around a nanoparticle, which looks like a Koosh ball, Stegh said.

Stegh developed the drug with Chad A. Mirkin, the discoverer and inventor of the SNA platform and the George B. Rathmann Professor of Chemistry at the Weinberg College of Arts and Sciences and director of Northwestern’s International Institute for Nanotechnology.

The glioblastoma drug represents a revolutionary new class of drugs. The novel SNA platform on which it is based can be applied to other types of neurological diseases, such as Alzheimer’s, Huntington’s and Parkinson’s, by similarly turning down the genes that lead to those diseases.

It’s highly unusual for a drug to be developed in preclinical research at a university, shepherded through U.S. Food & Drug Administration approval as an investigational new drug and studied in a clinical trial — all within the same university and without funding from a pharmaceutical company. In most cases, a drug is developed and licensed to a pharmaceutical company.

“We want to move the technology forward as quickly as possible because there are patients with a disease with no current cure,” Kumthekar said.

Dr. Leon Platanias, director of the Lurie Cancer Center, said, “These exciting findings for the first time support the potential of spherical nucleic acids for drug delivery to brain tumors. They may prove to have important long-term translational implications for the treatment of these tumors.”

Kumthekar and Stegh are members of the Lurie Cancer Center.

Stegh is shareholder of Exicure Inc., which develops SNA therapeutics. He and Caroline Ko are inventors on patent entitled “Nanoconjugates able to cross the blood-brain barrier.” Rimas Lukas serves on the speakers’ bureau for Novocure and has received honoraria for medical editing for EBSCO Publishing and Medlink Neurology, for creating and presenting CME board review material for American Physician Institute and Clinical Care Options, and for consulting from Abbvie, Eisai, NewLink Genetics and Reneuron. Lukas also has served on advisory boards for Monteris and Novocure. Margaret Schwartz has served on the advisory board and the speakers bureau for Novocure. Jeremy Heidel has been a paid consultant to Northwestern University for the NU-0129 project.

This research was supported by the Office of Research at Northwestern University, the Center for Cancer Nanotechnology Excellence Initiative of the National Institutes of Health (NIH) under award U54 CA151880 and 199091, the Northwestern brain tumor SPORE grant under the National Cancer Institute award P50CA221747, NIH grant S10OD020118, NIH ARRA grant SP0007167 and Department of Energy contract DE-AC02-06CH11357.

Source:
Adapted (with modifications) from the Northwestern Now, published on March 10, 2021, by Marla Paul.