Freeze-dried vaccines that can rehydrate on demand

CBC awardee, Michael Jewett, NU, and a team of biochemical engineers offers a new solution for vaccine storage with the invention of a new method of vaccine production 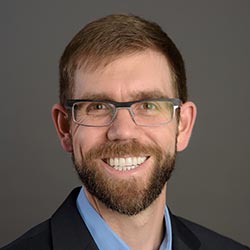 Michael Jewett, Professor, Department of Chemical and Biological Engineering, Center for Synthetic Biology and Chemistry of Life Processes Institution (NU), and a team of biochemical engineers developed a method to freeze-dry essential components of vaccines that can be rehydrated with a drop of water and administered on-demand in one hour. The article, On-demand biomanufacturing of protective conjugate vaccines, was published in Science Advances, February 3, 2021. The platform is called iVax and works by using cell-free vaccine development as opposed to living cells typically used in making vaccines. The iVax platform does not use the entire cell in the vaccine, but removes the cell’s wall and collects only the molecular machinery which is needed to make the vaccine. The cellular extracts are stable for months and can be rehydrated to create vaccines on site. The iVax platform could be used to develop vaccines to treat antibiotic resistant infections such as typhoid and provide the means for rapidly responding to pathogen outbreaks. The researchers say the approach has the potential to be expanded to viruses.

An interview with Dr. Jewett by Sarah Wells from MOTHERBOARD Tech by Vice, can be found below.

Scientists Invented Freeze-Dried Vaccines That Can Be Rehydrated on Demand

The bacterial vaccines are freeze-dried like strawberries in cereal, don’t need refrigeration, and could be extended to viral vaccines.

As COVID-19 vaccines roll-out across the country, the logistics of vaccine distribution are proving to be extremely challenging. One of the many issues is that despite months of development and trials, these vaccines can still be tripped at the finish line by one seemingly mundane cause: refrigerators.

Once removed from refrigeration, COVID-19 vaccine doses must be administered within a short time frame or risk spoilage. This need for constant refrigeration also opens the door for some too-easy sabotage by militant conspiracy theorists. The quest for cold affects not only COVID-19 vaccines, but can widely slow or restrict vaccine access in low and middle-income countries as well where predictable refrigeration is not a guarantee. According to the World Health Organization, over 50 percent of vaccine doses worldwide are wasted every year due to storage and transportation errors.

But now, thanks to a new method of vaccine production, this problem may soon have a solution. A team of biochemical engineers has designed a method to freeze-dry essential components of vaccines that can be simply rehydrated with a drop of water and administered on-demand at their final destination in just one hour. The researchers created a proof-of-concept bacterial vaccine, and say the approach can be expanded to viruses. The work was published on Wednesday in the journal Science Advances.

The platform is called iVax and works by using cell-free vaccine development as opposed to living cells typically used in vaccines. Instead of including the entire cell in the vaccine, the researchers remove the cell’s wall and collect only its molecular machinery, which can be imagined as the cell’s engine.

When it comes to actually freeze-drying these vaccine components, Michael Jewett, a co-lead author on the study and a professor of chemical and biological engineering at Northwestern University, told Motherboard that the process isn’t too different from what a strawberry goes through to be freeze-dried before hitting our cereal bowls.

Once they’ve been freeze-dried, Jewett says that these cellular extracts can stay stable for months without additional temperature control and can be simply rehydrated at their final destination to jump start a chemical reaction to create vaccines on site. From there, it’s as simple as purifying and administering the vaccine—all for about $1 per dose.

But, these vaccines are far from ready for their prime-time debut. Right now, the process is just being developed for bacterial vaccines, which means they’re a different flavor of vaccine from those that would protect against viruses like SARS-CoV-2—although, in the future, expansion into other vaccine types may be possible.

Nevertheless, the bacterial vaccines the team has been developing and testing in mice have seen promising results.

“Vaccines made by our freeze-dried, cell-free system work just as well, and in some cases better, than the traditional approach,” says Jewett.

While Covid-19 vaccines might be top of everyone’s minds today, Jewett and colleagues are looking a little further into the future with their vaccine development. In particular, they’re focusing on using this method to develop vaccines to treat antibiotic resistant infections, such typhoid, and to even combat bioterrorism. Such vaccines have been historically difficult to manufacture, but the researchers hope that their new approach could offer a cheaper and quicker solution.

And in the event of future pandemics, Jewett says that creating freedom from clunky, centralized supply chains and refrigeration demands will be essential to providing fast and effective vaccines that can truly curb disease spread, especially for those most vulnerable.

“iVAX provides a unique means for rapidly responding to pathogen outbreaks and emergent threats,” said Jewett. “This might, in the future, promote better access to medicines through decentralized production.”

Source:
Adapted (with modifications) from the MOTHERBOARD Tech by Vice, written by Sarah Wells on February 3, 2021, “Scientists Invented Freeze-Dried Vaccines That Can Be Rehydrated on Demand.”