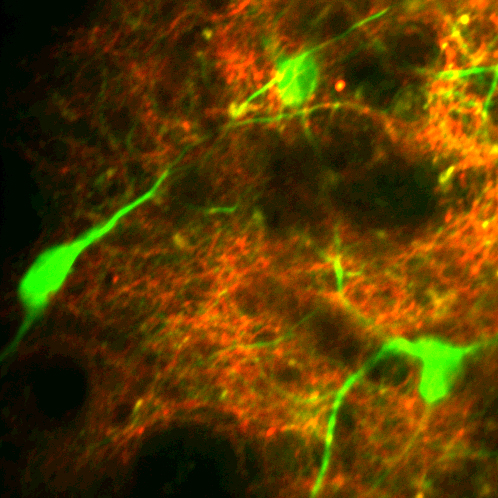 Neurons (green) and synapses (red) imaged in the brain of a behaving mouse using a novel microscope built with support from the Chicago Biomedical Consortium. These are the synapses that degenerate in Parkinson’s disease, leading to movement deficits. Credit: Dan Dombeck, Northwestern University

EVANSTON, Ill. — The Searle Funds at The Chicago Community Trust has renewed its funding commitment to the Chicago Biomedical Consortium (CBC), an innovative research and education collaboration of Northwestern University, the University of Illinois at Chicago and the University of Chicago that has helped establish the Chicago area as a leader in biomedical sciences.

The Searle Funds has pledged $21 million over five years, including $5 million for the first year, which began Jan. 1. This extraordinary support will continue to stimulate the CBC’s multi-institutional, interdisciplinary collaborations for improving human health. During the prior decade of CBC Phase 1, many notable discoveries have been made in a wide array of biomedical fields.

The CBC is launching an important second phase: a focus on fostering a culture of entrepreneurship among university researchers. New initiatives include a forum for academic and industry scientists to discuss commercialization ideas and a program supporting translational research projects with funding and early commercial guidance.

“The CBC is an engine for innovation, powered by the brilliant faculty of three world-class institutions,” said Terry Mazany, president and CEO of The Chicago Community Trust. “It is this level of innovation that will distinguish cities competitive in the 21st century.”

“In the past 10 years, the CBC has made remarkable strides, leveraging the talents and resources of Northwestern University, the University of Chicago and UIC to boost discovery and the Chicago region’s economy,” said Renee Michaels, vice president of Kinship Foundation, a private operating foundation established to advance the Searle family’s institutional philanthropy.

“We’re pleased to continue to support the CBC as it enters Phase 2, where it will apply the values of collaboration to strengthen connections within our biomedical ecosystem, build a stronger pipeline for discoveries to reach the marketplace and strengthen the entrepreneurial culture within the universities around life sciences,” Michaels said. She and Mazany delivered remarks at a Dec. 16 special event celebrating the Chicago Biomedical Consortium and the continued support of the Searle Funds.

Members of the Searle family were instrumental in establishing the CBC and have supported the enterprise through the Searle Funds at The Chicago Community Trust since the CBC’s inception in 2006.

For 11 years, the CBC has enabled risk-taking discovery science, resulting in an increased understanding of the biology underlying an array of medical conditions, such as heart disease, autism, leukemia, diabetes and Parkinson’s disease. Areas of supported research include drug discovery, epigenetics, biomedical engineering, proteomics and systems biology, to name just a few.

With a strong foundation in place, the CBC now is poised to accelerate the translation of scientific discovery to clinical application and the development of therapeutics. This will help bolster the biotechnology community in the Chicago area.

The CBC’s two new accelerator programs will partner with existing programs at the three universities to help identify promising research for which a boost of advice and support may make a difference in timing and outcome. These initiatives are:

Also new is the CBC Entrepreneurial Postdoctoral Fellowship program. It will identify and support a cohort of young researchers interested in working in the biotech startup space of Chicago.

More than 1,000 faculty members from the three institutions have applied for CBC funding, with 408 having received awards. The CBC support helped faculty secure an additional $514 million in grant funding from external sources, primarily the National Institutes of Health, since 2006.

Additional comments about the CBC and the Searle Funds at The Chicago Community Trust:

“For a decade now, the vision and commitment of the CBC to link the complementary research strengths of the Chicago area’s three major research universities have developed a record of innovation and economic development for the city and the region. And we are only getting started. We are most grateful to the Searle Funds at The Chicago Community Trust and confident that their ongoing support of our tripartite collaboration will continue to produce significant breakthroughs.”

“Over the past decade, the investments of the Searle Funds at The Chicago Community Trust in the CBC have been transformative in fostering scientific collaborations with our partner universities. Through these investments, our scientific teams have made notable discoveries in areas including drug development and cancer diagnostics. We are most enthusiastic about the promise of the CBC Phase 2 award to accelerate the translation of scientific discovery toward clinical applications through its strategies to foster a culture of entrepreneurship.”

“The success of the CBC demonstrates the power of biomedical collaboration among these three institutions, made possible by philanthropic support that has produced tangible benefits. It is an important commitment for our region and for continued innovation that is making an impact across many biomedical disciplines. We are grateful for the renewal of support from the Searle Funds at The Chicago Community Trust.”

Dr. Lucy A. Godley, professor in the section of hematology/oncology, department of medicine, and CBC scientific director, University of Chicago:

“I am extremely appreciative of the support from the Searle Funds at The Chicago Community Trust to advance biomedical research across our three universities. I am excited to work with my co-scientific directors Rick Morimoto and Brian Kay, Katie Stallcup and the entire CBC staff, as well as our incredibly talented faculty to realize the vision of expanding the focus of our work within the CBC in the upcoming Phase 2 projects.”

“The CBC has been transformative in the way it has brought together researchers at the three universities and consequently made the city’s biomedical scientific community much stronger. Faculty no longer look just to the two coasts for collaborators. In addition, the CBC has facilitated new levels of sharing of instrumentation and core facilities. This has enhanced our infrastructures, which is especially important at a time of limited federal grant support.”

Richard I. Morimoto, the Bill and Gayle Cook Professor of Biology in the Weinberg College of Arts and Sciences and CBC scientific director, Northwestern University:

“The CBC’s efforts to establish a biomedical community such as this is unique across the country, and it will distinguish Chicago as a destination for research and training. We will continue to bring together the most exciting researchers to share their discoveries and partner with others to accelerate discovery and translation.”