Getting Yeast to Pump Up the Protein Production

Congratulations to the CBC Catalyst Team member Keith Tyo (NU) on his recent publication in the February 2015 issue of Biotechnology and Bioengineering, “Blocking Endocytotic Mechanisms to Improve Heterologous Protein Titers in Saccharomyces cerevisiae.” Tyo, together with Konrad Kording (NU), and Douglas Bishop and Lucia Rothman-Denes (UChicago) are recipients of the CBC Catalyst Award in the Fall 2011 Round for a project titled “A Molecular Chart Recorder.” 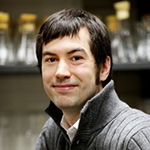 From manufacturing life-saving biopharmaceuticals to producing energy-efficient biofuels, the cost-effective production of proteins will be essential to revolutionizing the future of healthcare and energy.

For years, scientists have turned to yeast as a quick and inexpensive way to mass-produce proteins for a variety of useful products. Now Northwestern University’s Keith Tyo (right) has found a way to gather more protein without actually making the yeast produce more.

“The idea is to make as much protein as possible,” said Tyo, assistant professor of chemical and biological engineering in the McCormick School of Engineering. “The community has spent a long time thinking about how to increase the rate of production.” 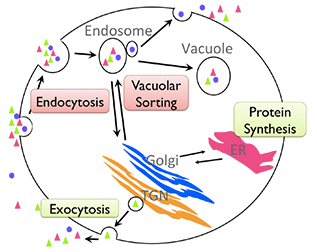 A unicellular microorganism, yeast is a top candidate for producing protein because it grows rapidly and needs few resources to thrive. But the scientific community did not realize that yeast reabsorbs more than half of the protein it secretes (see the accompanying schematic of a yeast cell).

“Researchers kept trying to increase the production rate of a protein product to accumulate more product outside of the cell,” Tyo said. “They didn’t realize that even though they measured five grams of protein outside the cell, there were actually ten grams produced. It’s just that the other five grams were immediately taken back up again.”

Working with his postdoctoral fellow William Rodriguez-Limas and undergraduate researcher Victoria Tannenbaum (WCAS ’14), Tyo found the proteins in yeast responsible for the uptake functions and genetically knocked them out. The team harvested two- to three-fold more protein from the yeast cells that were unable to reabsorb the secreted protein.

Funded by the Chicago Biomedical Consortium and the Searle Funds at The Chicago Community Trust, the research paper received the “Editor’s Spotlight” in the February 2015 issue of Biotechnology and Bioengineering.

Being able to collect more protein product from yeast could lead to cheaper biopharmaceuticals, such as insulin, and biofuels, such as ethanol. The next step is to examine the protein-uptake roles in other organisms that researchers rely on for protein production.

“A large percentage of the cost of a gallon of ethanol goes toward making enzymes—which are proteins—to degrade the starch and cellulose for fermentation,” Tyo said. “These enzymes are made by fungal organisms like yeast. It’s a logical place to try our technology.”

Adapted from: Getting Yeast to Pump Up the Protein Production.
Researchers have found a way to harvest industrially useful protein from yeast in much greater quantities.

Images: Keith Tyo (top) and "A schematic of a yeast cell", Courtesy of Northwestern University