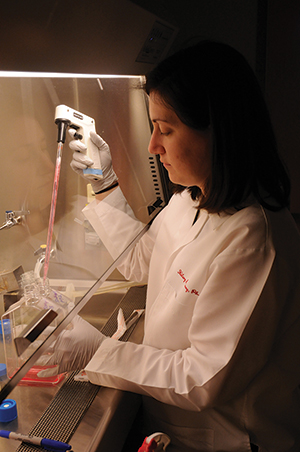 Ovarian cancer, often referred to as the “silent killer,” is notorious for being detected late, at a frequently deadly metastatic stage. The five-year survival rate for ovarian cancer patients is only 44.6 percent. It is estimated that in 2015, 21,290 women in the U.S. will be diagnosed with ovarian cancer and about 14,180 will die from the disease. Late detection is partially due to the unusual mechanism of metastasis.  Ovarian cancer metastasizes directly within the abdomen via the peritoneal fluid.  Detached ovarian cancer cells adhere to the surface of the abdominal organs, superficially invade them, and proliferate before symptoms appear in patients. A drug that is able to impede this metastatic process could significantly reduce the extremely high mortality of ovarian cancer.

In their Nature Communications paper, the team reports preliminary results of a HTS screen performed on the 3D culture system in the UChicago HTS Screening Facility under direction of Sam Bettis, also a co-author on the paper. One compound identified in the HTS screen, beta-escin, a natural compound isolated from the horse chestnut, was found to be efficacious both in vitro and in vivo,  In the 3D culture system developed at UChicago, beta-escin very efficiently inhibited three metastatic parameters of ovarian cancer cell behavior (adhesion, migration, invasion) and impacted the cancer cells’ ability to survive. Moreover, the in vitro activity was demonstrated to be similar in vivo: mice treated with beta-escin exhibited a very efficient reduction (>94%) of metastatic tumor development.

The novel organotypic culture system developed by the UChicago team is likely to set a precedent as a model system for human disease.  It is uniquely suited to the accurate and efficient identification of effective new drugs, due to its physiological relevance and its adaptation for HTS. Congratulations!