Congratulations to the CBC Lever Team member Tony Kossiakoff (UChicago) on his recent publication in the February 2015 issue of Science, “Architecture of the nuclear pore complex coat.” Kossiakoff, together with Geoffrey Greene (UChicago), Brian Kay (UIC) and Jason Brickner (NU) are recipients of the 2012 CBC Lever Award which, together with the NIH grant, titled “Recombinant Antibody Network (RAN),” contributed to the establishment of the Center for Production of Affinity Reagents for Human Transcription Factors: Chicago Synthetic Antibody Pipeline (CSAP). 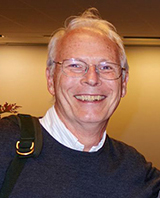 Nuclear pore complexes (NPCs) are located in the nuclear membrane and function as transport channels, bi-directionally shuttling molecules, notably mRNA, between the nucleus and the cytoplasm. Because of their function as gatekeepers in the flow of genetic information, NPCs are frequently targeted by viruses such as HIV and Ebola, which hijack the nuclear transport apparatus in order to take control of the infected cell’s replication mechanism. Understanding the structure of the NPC has been a goal, with many desirable therapeutic applications.

NPCs are relatively huge (~120 MDa) and complex. They consist of approximately 34 different proteins, termed nucleoporins (nups) that assemble into structural units repeated multiple times around the nuclear pore. The so-called NPC coat, thought to modulate the pore curvature, is believed to be formed by an evolutionarily-conserved “coat nup complex (CNC).” The exact architecture of the NPC remains, however, unknown.

Some of the reasons hindering the progress in the field have been the enormous complexity of the structure, as well as the difficulty of obtaining stable crystals, since the nuclear pore is highly dynamic. To overcome the instability issue, a Caltech team led by André Hoelz, sought help from Tony Kossiakoff, Professor at the Department of Biochemistry and Molecular Biology, the University of Chicago (right), a specialist in the field of synthetic antibodies (sAB) and co-author on the Science paper. In 2012, Kossiakoff, along with several collaborators, established the Chicago Synthetic Antibody Pipeline.

To help elucidate the NPC structure, Kossiakoff’s UChicago group engineered conformation-specific, high-affinity sABs that were able to stabilize a part of the NPC, the CNC (see figure; sAB-57 is marked in grey). Such stabilized complexes allowed for the crystal structure reconstitution of ~400 kDa CNC from S. cerevisiae at a 7.4-Å resolution. The electron microscopy-based comparison to human CNC suggested that NPCs are evolutionarily conserved.

The elucidation of the crystal structure of CNC accounts for approximately16 MDa of the total mass of the NPC. It is the largest structural component of NPC characterized so far. The demonstration of the sABs’ assistance in the successful characterization of the CNC will undoubtedly be followed by future applications to crystalizing important but unstable structures. Congratulations! 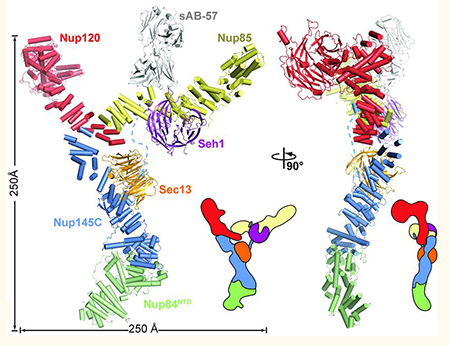