Past CBC awardee and frequent presenter at CBC-organized events, Rick Silverman, NU, highlighted in the journal Science, for his work to develop novel anti-addiction drugs

The opioid epidemic is on the rise — in 2016 it took more than 42,000 lives in the U.S., more than in any previous year. Unfortunately, current overdose treatments are not always effective and/or available at the time of crisis. Hence, there is an urgent need for the development of quick and effective measures to curb the growing opioid addiction and its devastating, and, too frequently fatal, consequences. Richard Silverman, NU, is at the forefront of a new wave of anti-addiction drug development. A compound recently discovered by Silverman — OV329 — appears to be very promising in fighting addiction, at least in the animal studies performed so far. The below editorial by Robert Service, published today in Science, describes OV329 development and talks about other approaches in a quest for more reliable addiction antidotes. Silverman has many links to CBC: he received a CBC HTS Award (2015) and presented his research at two Annual CBC Symposia (2013 and 2017), and at the CBC Tech Day (2013). CBC congratulates Rick and celebrates this innovative and prolific scientist.

Powerful chemical countermeasures could one day enter the battle against opioid addiction, which killed more than 42,000 people in the United States in 2016. Doctors and first responders already use medications to combat the effects of opioids, including the high and the slowed breathing of an overdose. But the new candidate drugs target the neural circuitry of addiction itself.

A compound known as OV329 is the latest addition. In animal studies it quiets the brain’s reward system, sharply reducing cravings and halting addicted animals’ tendency to self-administer cocaine and other habit-forming drugs. Other drugs in the pipeline also target the reward system, albeit through a different mechanism. All raise hopes that doctors could soon have a new way to treat addiction, and not just to drugs and alcohol. The medicines could potentially also be used to fight food and gambling addictions. 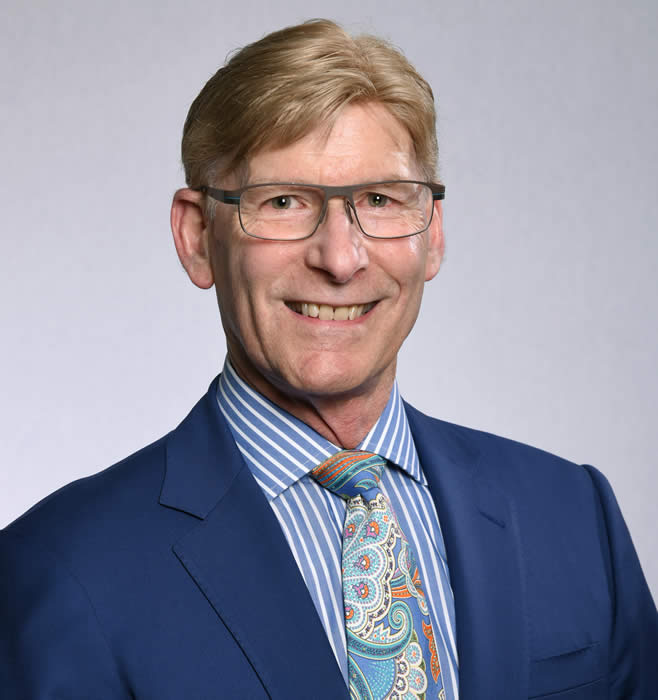 “It’s a great unmet medical need,” says Richard Silverman, a chemist at Northwestern University in Evanston, Illinois, who developed OV329. OV329 has now been picked up by Ovid Therapeutics in New York City, which is continuing animal studies and hopes to launch human trials of the would-be drug. “It’s a very interesting compound and clearly very promising,” says Andrea Hohmann, a neuroscientist at Indiana University in Bloomington who is not involved in the work.

Addiction occurs when drugs or other pleasurable stimuli hijack the brain’s normal reward system, which has evolved to reinforce beneficial behaviors, such as eating food and having sex. Such behaviors produce spikes in the release of the neurotransmitter dopamine in brain regions that are associated with motivation. Opioids and other drugs activate other neural receptors and create a euphoric high, which in turn triggers addiction-forming dopamine spikes. When addicts try to quit, encountering familiar scenes associated with drug-taking can trigger dopamine spikes, leading to cravings that make it hard to stay clean. “Their brain is constantly reminding them of how good it felt,” says Brett Abrahams, Ovid’s director of preclinical biology. “That’s what we’re fighting against.”

Most existing medications for addiction try to counter the effects of specific drugs. For example, buprenorphine, used in fighting opioid addiction, binds to opioid receptors without providing as much euphoria as the opioid. At the same time, it satisfies some of the addict’s cravings by triggering the dopamine reward system. But addicts on buprenorphine continue to want the real thing, and they often raise the level of opioids they take in an attempt to get high, causing an overdose.

OV329 and other compounds come at the problem from another direction. OV329 blocks an enzyme, called GABA-AT, that breaks down GABA, an “inhibitory” neurotransmitter that helps suppress the firing of some neurons. The resulting higher GABA levels dampen the neural firing of dopamine-releasing neurons—and thereby block the brain’s reward system.

OV329 isn’t the first drug to act this way. A GABA-AT–blocking drug called vigabatrin is already on the market to treat epilepsy by calming overactive neurons. It has also been studied as a possible antiaddiction medication, but the results have been mixed in people. And because the drug isn’t very good at binding to its GABA-AT target, patients must take large doses, which in turn can lead to retinal damage. 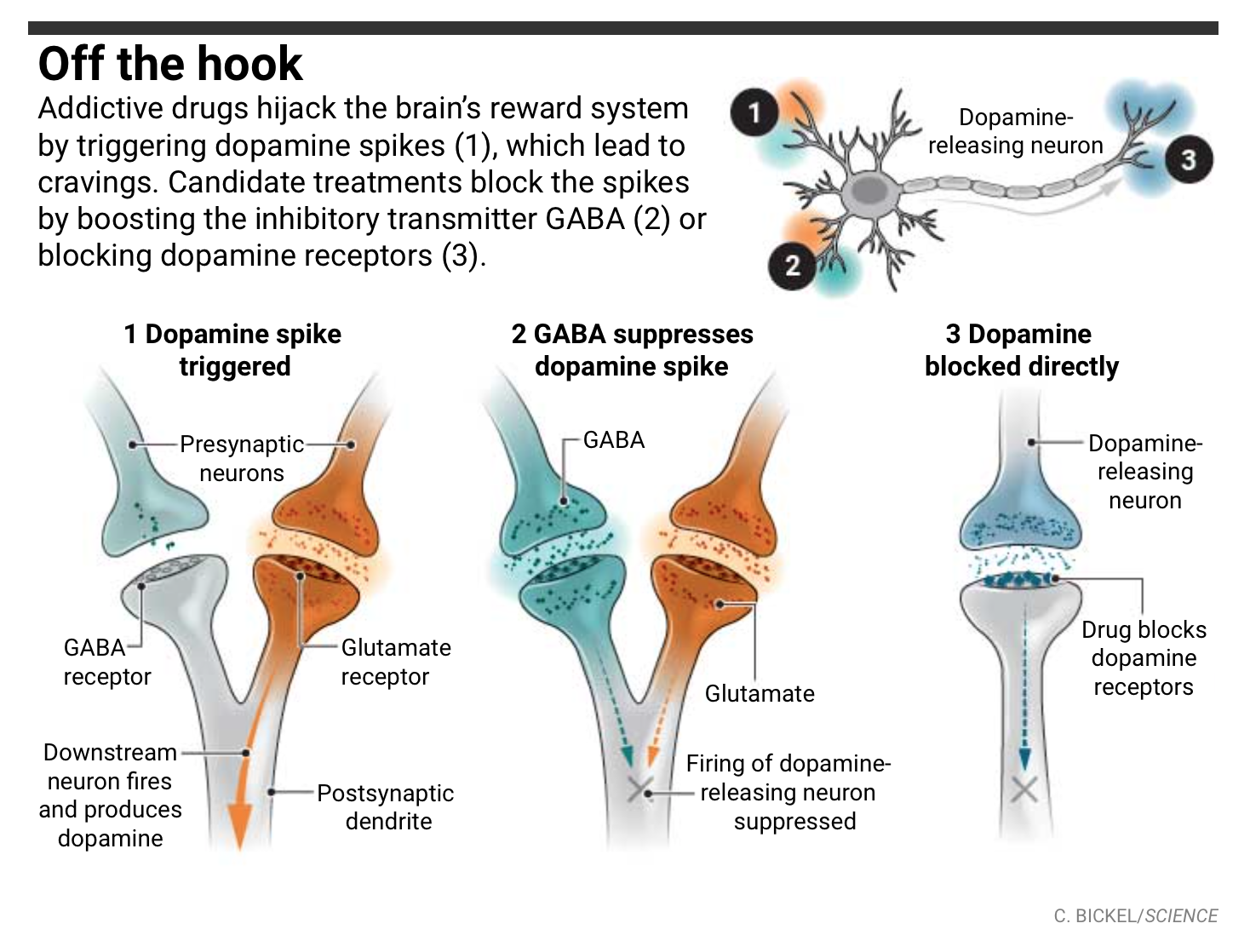 Dopamine-blocking medications could target not only addictive drugs such as cocaine, but also compulsive behaviors like gambling or eating. GRAPHIC: C. BICKEL/SCIENCE

In 2003, Silverman and his colleagues came up with a compound, known as CPP-115, that was 186 times more effective than vigabatrin at blocking GABA-AT. A company called Catalyst Pharmaceuticals is testing the drug to treat spasms in infants, and it has already cleared initial safety trials in people, raising hopes that it may also be useful in fighting addiction.

Now, Silverman, a veteran drug developer whose work 30 years ago led to Lyrica, a blockbuster drug to treat epilepsy and muscle pain, has gone one step further. In a paper published on 30 January in the Journal of the American Chemical Society, he and his colleagues report slightly tweaking the structure of CPP-115 to create OV329. OV329 binds more tightly to GABA-AT than its predecessor did—and that makes it 10 times more potent. When the researchers gave OV329 to cocaine- or nicotine-addicted rats, dopamine spikes were neutralized, blocking the addictive reward response and halting the animals’ self-administration of the drugs. “It’s extremely exciting,” says Stephen Dewey, a neuroscientist at New York University’s School of Medicine in New York City who led trials on vigabatrin and is now collaborating with Silverman.

Other compounds in the new wave of would-be addiction medications target the dopamine reward pathway more directly, by blocking a subset of dopamine receptors known as D3 receptors (D3Rs) that are abundant in brain regions associated with motivation and reward. Imaging studies have shown that people with cocaine addictions have even higher levels of D3Rs in those brain regions. And in recent years several studies have shown that D3R-blocking drugs sharply reduce an animal’s propensity to self-administer drugs such as cocaine, methamphetamine, and opioids. Unfortunately, several such D3R blockers have drawbacks, among them that the compounds don’t persist long enough in the body.

But that problem may be on the way to being solved. Last year, for example, researchers led by Amy Hauck Newman, a medicinal chemist at the National Institute on Drug Abuse in Baltimore, Maryland, reported in Neuropharmacology that two of the group’s newer D3R blockers, CAB2-015 and BAK4-5,4 appeared highly stable and potent. When rats hooked on the common opioid pain medication oxycodone were given the D3R blockers, the animals sharply reduced their drug taking.

Newman says she and her colleagues have still newer compounds in the works that also appear highly effective in rats, and studies with nonhuman primates are underway. Although it’s still early days for these compounds, blocking D3Rs “is a really clever strategy and a fruitful way to go,” Dewey says.

Adapted (with modifications) from Science, by Robert F. Service, published on April 13, 2018.