Congratulations to Jaehyuk Choi, MD, PhD, Assistant Professor of Dermatology, and of Biochemistry and Molecular Genetics, Feinberg School of Medicine, NU, for being selected a finalist for the inaugural Trailblazer Prize for Clinician-Scientists by the Foundation for the National Institutes of Health (FNIH)! Dr. Choi is one of the three finalists with the winner to be announced and awarded the Prize and a $10,000 honorarium at the FNIH Annual Fall Board Dinner on Wednesday, October 24, 2018 in Washington, D.C. Dr. Choi is also a CBC awardee: in 2017, together with Jun Huang (UChicago), he received a CBC Catalyst Award to study tumor-specific T-cells in Merkel Cell Carcinoma. The CBC is proud to have provided support to this exceptional young scientist!

The Foundation for the National Institutes of Health (FNIH) Press Release  |  July 31, 2018 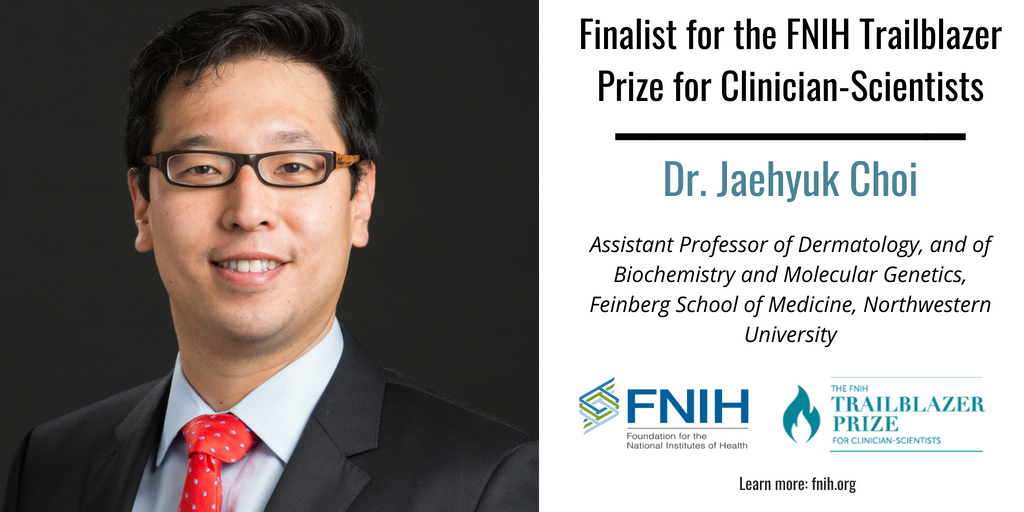 BETHESDA, MD, July 31, 2018 – The Foundation for the National Institutes of Health (FNIH) has selected three finalists of the inaugural Trailblazer Prize for Clinician-Scientists (Trailblazer Prize): Daniel Bauer, M.D., Ph.D., Harvard Medical School, Jaehyuk Choi, M.D., Ph.D., Feinberg School of Medicine, Northwestern University and Michael Fox, M.D., Ph.D., Beth Israel Deaconess Medical Center, Harvard Medical School. These three early-career clinician-scientists, whose work spans the fields of hematology, oncodermatology and neurology/psychiatry, are being recognized for their outstanding research contributions that have the potential to or have led to innovations in patient care. The winner will be announced and awarded the Trailblazer Prize and a $10,000 honorarium at the FNIH Annual Fall Board Dinner on Wednesday, October 24, 2018 in Washington, D.C.

“The FNIH is delighted to recognize these three outstanding clinician-scientists as the finalists of the 2018 Trailblazer Prize. Even in the earliest stages of their careers, they are driving innovations in the lab that can directly translate into new approaches for preventing and treating disease,” said Steven M. Paul, M.D., Chairman of the Board, FNIH. “We hope that showcasing their unique work through this prize will inspire a new generation of clinician-scientists, whose work is invaluable to the medical field.”

The finalists were selected by a jury of five distinguished biomedical clinical-scientists, chaired by Dr. Paul, from more than 100 outstanding nominations for the following accomplishments:

In addition to Dr. Paul, other members of the esteemed jury include:

“We had an overwhelming response to our call for nominations for the first year of the Trailblazer Prize with many outstanding nominees, but these exemplary clinician-scientists rose to the top of the list,” said Maria C. Freire, Ph.D., President and Executive Director, FNIH. “Their innovative research will undoubtedly improve patient care in their fields far into the future.”

For more information about the Trailblazer Prize, visit fnih.org/TrailblazerPrize.

About the Foundation for the National Institutes of Health

The Foundation for the National Institutes of Health creates and manages alliances with public and private institutions in support of the mission of the NIH, the world’s premier medical research agency. The Foundation, also known as the FNIH, works with its partners to accelerate biomedical research and strategies against diseases and health concerns in the United States and across the globe. The FNIH organizes and administers research projects; supports education and training of new researchers; organizes educational events and symposia; and administers a series of funds supporting a wide range of health issues. Established by Congress in 1990, the FNIH is a not-for-profit 501(c)(3) charitable organization. For additional information about the FNIH, please visit fnih.org.

Adapted (with modifications) from the The Foundation for the National Institutes of Health (FNIH) Press Release, published on July 31, 2018.