Congratulations to the three Northwestern scientists, Sir Fraser Stoddart, Yonggang Huang and Chad Mirkin for being elected foreign members of the Chinese Academy of Sciences! The three scientists are among a total of 16 foreign nominees in 2017, from 8 countries. Mirkin and 2016 chemistry Nobel laureate Stoddart, were elected to the chemistry division, and Huang was elected to the technical sciences division. Chad’s links to CBC go back to 2010 when he became a co-recipient of a CBC Lever Award for the project: “Nanomaterials for Cancer Diagnostics and Therapeutics.”

Sir Fraser Stoddart, Chad Mirkin and Yonggang Huang are honored for their achievements 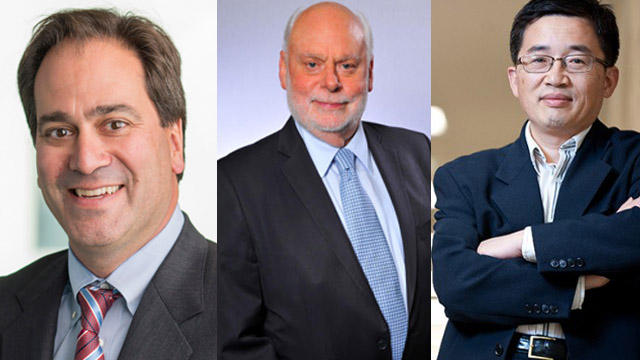 EVANSTON – In a rare honor for an American university, three Northwestern University scientists — Sir Fraser Stoddart, Chad Mirkin and Yonggang Huang — have been elected foreign members of the Chinese Academy of Sciences. The three were selected for their scientific achievements and contributions to promoting the development of science and technology in China.

Election to the academy is one of the highest honors that China bestows on a citizen of a foreign country. The Chinese Academy of Sciences elects new academicians and foreign members biennially. This year, the academy selected 16 foreign scientists from eight countries, including the three from Northwestern.

“To be recognized by the Chinese Academy as a foreign member is a wonderful honor that reflects the global impact our research in chemistry and nanoscience is having,” said Mirkin, director of the International Institute for Nanotechnology and the George B. Rathmann Professor of Chemistry.

Mirkin and Stoddart, a 2016 Nobel laureate in chemistry and Board of Trustees Professor of Chemistry, were elected to the chemistry division. Mirkin and Stoddart are faculty members in the Weinberg College of Arts and Sciences. Stoddart said the election is a result of Northwestern’s ongoing work building relationships and collaborating with other scientists internationally.

“This kind of international recognition is a direct consequence of forging strong ties with institutions and scientists outside the United States,” Stoddart said.

Adapted (with modifications) from Northwestern Now, posted on November 29, 2017.