An important new finding with implications for developing a treatment for glioblastoma has just been published in Cancer Cell by a NU team led by Shi-Yuan Cheng. The group identified a protein kinase MST4-dependant pathway that plays a tumor-promoting role in glioblastoma through increasing autophagic activity. Autophagy is unfortunately frequently induced by anti-cancer treatments. However, the scientists discovered a novel protein called ATG4B—a substrate of MST4—that, when inhibited, led to reductions in tumor size and prolonged survival in mice treated with radiotherapy. A prior CBC awardee, Jack Kessler, NU, was part of the team which made this discovery. Kessler was a co-recipient of a CBC Catalyst Award (2008). He was also a keynote speaker at the 5th Annual CBC Symposium (2007), “Where Science Goes Next: Translation of Basic Discovery for Human Health.” Congratulations to all scientists involved in this project! 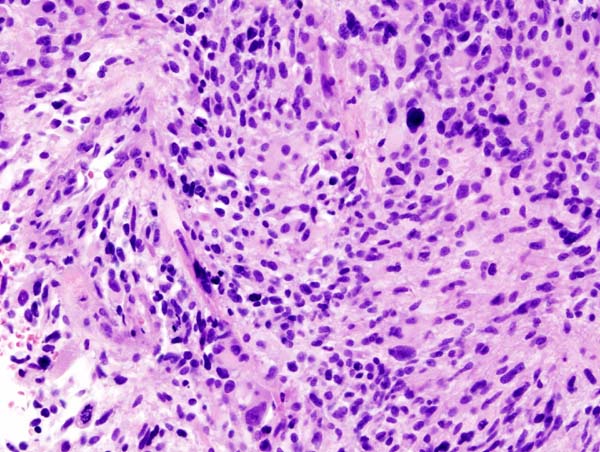 A Northwestern Medicine study, published in the journal Cancer Cell, has provided new insights into a mechanism of tumor survival in glioblastoma and demonstrated that inhibiting the process could enhance the effects of radiation therapy.

Glioblastoma is the most common and aggressive type of brain tumor, with a particularly poor prognosis. Patients are treated with surgery, radiation therapy and chemotherapy, but there is no cure.

Previous research has suggested that autophagy — a natural process of cell destruction that also plays a protective role under stress conditions — contributes to tumor survival and growth, and is induced by common cancer treatments, rendering tumor resistance to therapies. As such, there has been significant interest in inhibiting this survival mechanism.

In the current study, the scientists sought to understand the molecular mechanisms regulating autophagy in the cancer, which could reveal novel targets for future treatments.

“Our findings solidified the concept of the promoting role of autophagy in malignant glioblastoma, and point out the necessity of specifically targeting autophagy in combination with first-line treatments — like radiation — for glioblastoma and other tumors,” said principal investigator Shi-Yuan Cheng, PhD, professor of Neurology in the Division of Neuro-Oncology, and a member of the Lou and Jean Malnati Brain Tumor Institute at Northwestern Medicine and the Robert H. Lurie Comprehensive Cancer Center of Northwestern University.

In the study, the scientists first established that a protein kinase called MST4 plays a tumor-promoting role in glioblastoma. They then identified, for the first time, the substrate of MST4, called ATG4B, which mediates MST4’s tumor-promoting role through increasing autophagic activity.

Finally, the scientists investigated the effect of an inhibitor of ATG4B in a brain orthotopic xenograft model of glioblastoma. They showed that when used in combination with radiotherapy, the inhibitor significantly slowed tumor growth and increased overall survival rates of tumor-bearing animals.

“We identified a pro-autophagic signaling axis in glioblastoma, whose pharmacologic inhibition enhances the anti-tumor activity of radiation,” Cheng explained, noting that the findings have the potential to be translated into clinical treatments.

Cheng was also co-author of a separate study, published in Nature Communications in November, that identified a protein called TRIM24 as a transcriptional co-activator in glioblastomas driven by mutations in the gene for epidermal growth factor receptor (EGFR). The paper suggests that TRIM24 may be a potential therapeutic target in such cancers.

John Kessler, NU, who is a co-author on the publication has following ties to CBC: