Insights Into Enzyme Targets Could Lead to New Cancer Therapies

Two CBC awards, a Catalyst and a Postdoctoral Research Award (PDR), are acknowledged in a recent Nature Communications’ publication: “Orthogonal ubiquitin transfer identifies ubiquitination substrates under differential control by the two ubiquitin activating enzymes.” The Catalyst Award (2011) was made to Hiroaki Kiyokawa (NU) and Jun Yin (Georgia State University; at UChicago at the time of the award) for the project “Identify Cell Cycle-Regulatory Substrates Ubiquitinated by the Apoptosis Inhibitor BRUCE.” The PDR (2014) was awarded to the first author on the paper, Xianpeng Liu, a postdoctoral fellow at the Kiyokawa lab at NU, for the project “Identify ubiquitination substrates specific for the non-canonical E1 enzyme UBA6.” Congratulations! 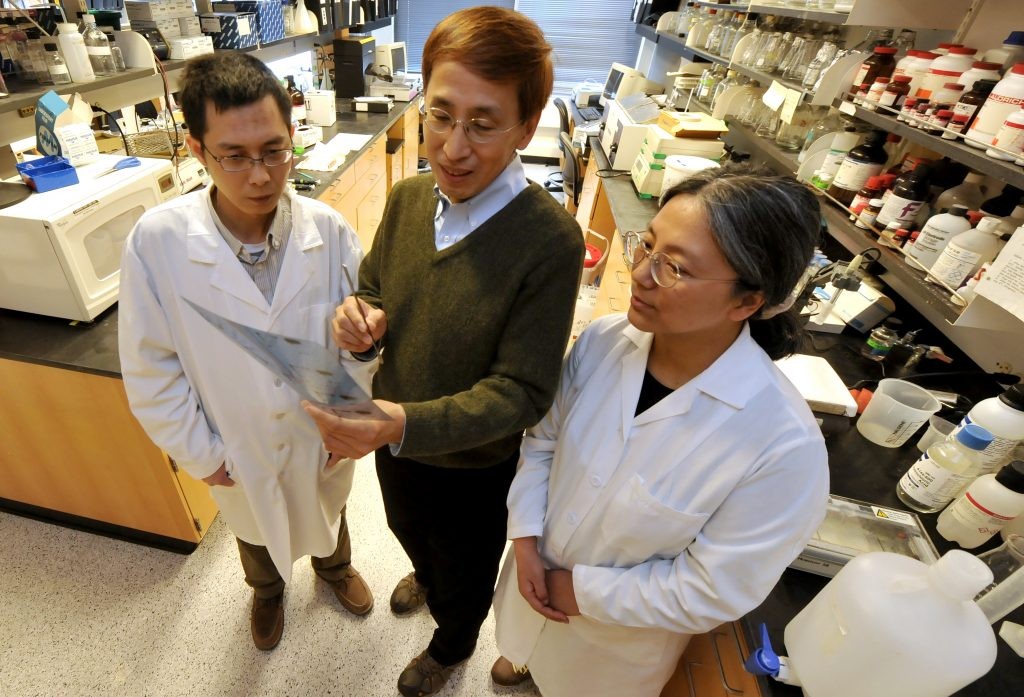 From left to right: First author Xianpeng Liu, PhD, a senior post-doctoral fellow in the Department of Pharmacology, NU, lead author Hiroaki Kiyokawa, MD, PhD, professor of Pharmacology and Pathology, and co-author Limin Sun, a research technologist, in their lab.

Northwestern Medicine scientists have identified for the first time the unique targets of two enzymes that activate ubiquitination, a key modification of proteins that controls a variety of cellular processes.

The findings, published in Nature Communications, have the potential to be translated into novel therapies for certain types of cancers and neurodegenerative diseases, as alterations in the ubiquitination process are thought to play a role in a number of pathologies.

The study was led by Hiroaki Kiyokawa, MD, PhD, professor of Pharmacology and Pathology. Xianpeng Liu, PhD, a senior post-doctoral fellow in the Department of Pharmacology, was the first author.

During the ubiquitination process, the protein ubiquitin bonds with its target protein through a series of sequential reactions involving three different classes of enzymes. The first group of enzymes in that cascade, ubiquitin activating enzyme E1, consists of just two enzymes called Uba1 and Uba6.

“Uba6 was only identified several years ago, and very few studies have paid direct attention to it,” Kiyokawa said. “But it’s natural to wonder whether these two activating enzymes, Uba1 and Uba6, are completely redundant, or if they have distinct functions and targets. That’s the question we addressed in this work.” 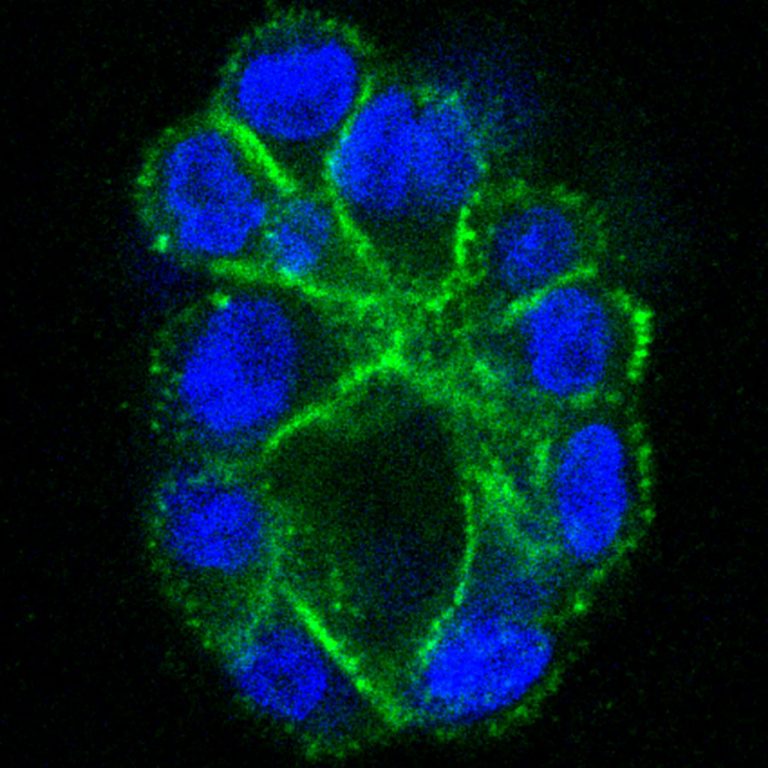 A mammary epithelial acinus — a saclike cavity in a gland — in culture. The florescent green shows membrane localization of Ezrin, a Uba6-specific ubiquitination target, while blue indicates cell nuclei.

The scientists determined that although there is some overlap in the pathways of Uba1 and Uba6, there are also downstream targets unique to each enzyme.

The study is also the first to apply orthogonal ubiquitin transfer (OUT) — a novel technology developed by Northwestern Medicine scientists in collaboration with Georgia State University — to identify direct targets of enzyme combinations in mammalian cells. “We’re now encouraging other investigators in the field to use the same technology, so we can continue discovering direct targets of other enzymes we’re interested in,” Kiyokawa noted.

The study was supported by the Chicago Biomedical Consortium Catalyst-026 and PDR-010, National Institutes of Health grants GM104498 and CA112282, the National Science Foundation grant 1057092, Project 985 startup grant WF220417001, the Lynn Sage Cancer Research Foundation and the director’s fund from the Robert H. Lurie Comprehensive Cancer Center. The research was also supported by Northwestern University’s Proteomics and Bioinformatics Cores, as well as the Center for Advanced Microscopy.

Catalyst Award (2011):
Hiroaki Kiyokawa (NU) and Jun Yin (Georgia State University; at UChicago at the time of the award) for the project “Identify Cell Cycle-Regulatory Substrates Ubiquitinated by the Apoptosis Inhibitor BRUCE”