The CBC is excited to report that the Genomic Data Commons (GDC) at the University of Chicago received world recognition in a presentation by former Vice President Joe Biden at the South by Southwest conference in Austin, Texas. A 2008 CBC Lever Award contributed to the establishment of the GDC, a platform containing anonymized genomic and clinical data from over 14,000 cancer patients. Tempus, a Chicago-based cancer-battling genomics startup that was cited in the article also has a CBC connection, with two CBC affiliates, Kevin White and Jonathan Silverstein who hold prominent positions in the company. White received the first CBC Recruitment Award in 2006 and is the President of Tempus. Silverstein is Tempus’s Chief Medical Informatics Officer and was one of the CBC’s founding scientific directors. 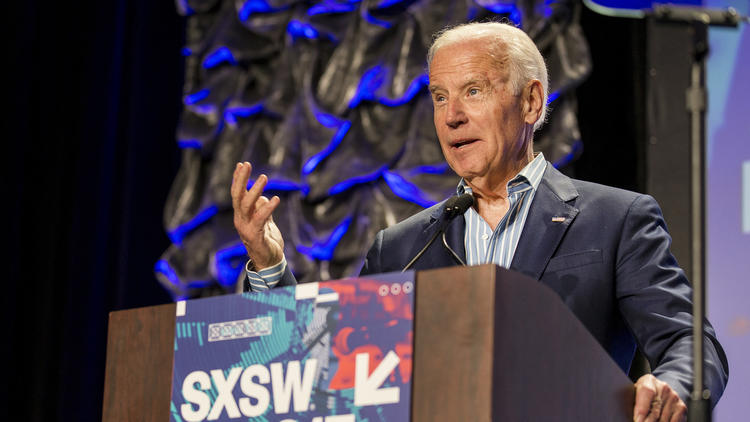 Former Vice President Joe Biden outlines his plan for the Biden Cancer Initiative during a panel at South by Southwest Interactive in Austin, Texas, on Sunday, March 12. (Ricardo B. Brazziell / Austin American-Statesman via AP)

Biden calls on tech crowd to help end cancer: ‘We need your help’

Former Vice President Joe Biden spoke about his cancer initiative — and highlighted progress on a program based at the University of Chicago — in an emotionally charged speech Sunday afternoon at the South by Southwest conference in Austin, Texas.

Biden, who was introduced by his wife, Dr. Jill Biden, talked about the progress of the “Cancer Moonshot” initiative and called on innovators to tackle issues surrounding the disease.

He spoke about his decision not to run for president after losing his son, Beau, to brain cancer in 2015.

“Like many of you, the passion Jill and I bring … is driven by a desire to spare other families what our family, and so many other families, have gone through,” he said. He recalled his answer when President Barack Obama asked if he had any regrets about his decision not to run.

“At the time, I had one regret about making the decision not to run, and that was I would have loved to become the president who presided over the end of cancer as we know it,” he said.

Biden spoke about the progress of the Moonshot initiative, including a tool that helps patients identify where cancer trials all over the United States are taking place and the trial criteria. He also mentioned the Genomic Data Commons at the University of Chicago, which helps researchers assess genomic and clinical information from cancer patients, and could be used to develop more effective treatments.

The platform went live in June 2016 with more than 14,000 anonymized patient cases, according to a University of Chicago blog post.

“Just since we started this aggregation of information at the University of Chicago … 80 million times that that has been accessed. Eighty million times. By researchers all over the world,” Biden said.

He called on the audience to find ways to better deal with the technological difficulties relating to cancer in health care, and improve the connectivity of data between organizations.

“We need your help,” he said. “Some of the most innovative minds in the world are sitting in front of me.”

One of them: Groupon co-founder Eric Lefkofsky, who said before the event he was going in early to meet Biden. Lefkofsky, who is the CEO of Chicago-based cancer-fighting genomics startup Tempus, spoke at a “Connect to End Cancer” panel earlier Sunday.

Source: Adapted (with modifications) from the Chicago Tribune. Originally written by Meg Graham for Blue Sky Innovation on March 12, 2017.