Muscular dystrophy progressively and irreversibly damages both skeletal and heart muscle. As there is yet no treatment to stop the degenerative process, scientists are looking to offset the loss of muscle mass by stimulating muscle regeneration. Elizabeth McNally and her postdoc, Mattia Quattrocelli, NU, have just published a study in Nature Communications where they describe an ability of human stem cell-derived mesodermal progenitors to induce muscle regeneration in a mouse model of muscle degeneration. This exciting result opens the door to potential clinical translation in the future. McNally was a recipient of two CBC Awards in the past: a Catalyst and a Spark, both awarded in 2008. Congratulations! 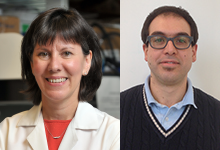 Elizabeth McNally, MD, PhD, the Elizabeth J. Ward Professor of Genetic Medicine, was a co-author on the study and Mattia Quattrocelli, PhD, a postdoctoral fellow in McNally’s lab, was one of the study’s co-senior authors.

Muscular dystrophy is a genetic disease characterized by the progressive loss of both skeletal and cardiac muscle mass. While there is no cure, physical therapy or medication can offer relief for symptoms, and recent advancements in induced pluripotent stem cells (iPSCs) have pointed to the possibility of future muscle regeneration therapies.

Past studies have shown that mouse-derived mesodermal iPSC-derived progenitor (MiP) stem cells can spur muscle regeneration in mice, with the unprecedented advantage of regenerating both heart and muscle tissue with the same stem cell type. However, the viability of human–based cells to perform similarly had been largely untested.

In addition, the study also explored ways to improve these stem cells’ ability to differentiate into both skeletal and cardiac muscle.

“While we can make stem cells differentiate into cardiac cells, making them differentiate into muscle cells has not been as easy,” said McNally, who is also the director of the Center for Genetic Medicine and a professor of Medicine in the Division of Cardiology and of Biochemistry and Molecular Genetics. 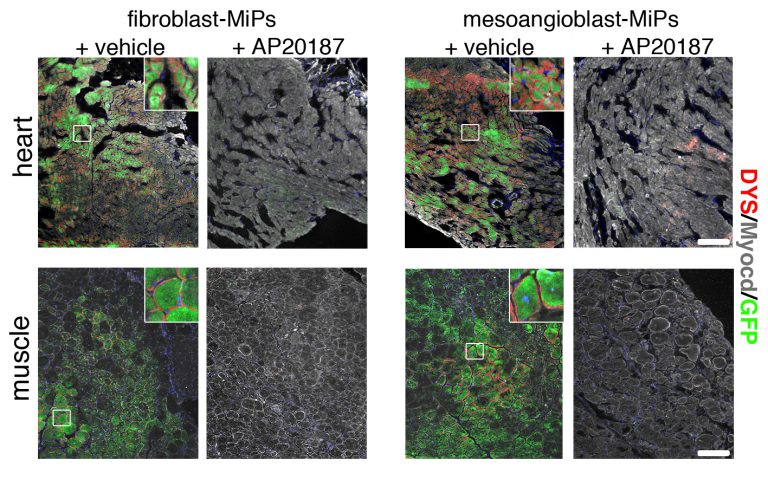 Images showing MiPs inducing regeneration of both heart and muscle tissue (green), and subsequent destruction of regenerated tissue when the MiPs are turned off by the molecule AP20187.

One possible solution is to use MiP cells created from skeletal muscle mesoangioblasts (MAB). The study also showed that these MAB-MiPs created more skeletal muscle cells when compared to MiPs derived from fibroblasts, a type of connective tissue cell. On the other hand, the capacity to generate cardiac muscle cells appeared comparable between the two.

However, treating fibroblast MiPs with microRNA cocktails showed even more promise, greatly improving the skeletal muscle differentiation of fibroblast MiPs, bringing them on par with MAB-MiPs.

In the future, these microRNA treatments could even be used to mobilize existing stem cells in addition to any newly injected cells, compounding the benefits of muscle regeneration therapy, according to the study.

“One of the most innovative aspects of this study is the identification of actionable molecules — the microRNA cocktails — to improve the innate efficiency of functional amelioration that human MiPs can impart on dystrophic muscle,” Quattrocelli said. “The next step will be to capitalize on these discoveries by improving safety and bringing this novel therapeutic option closer to clinical standards.”

McNally and Quattrocelli intend to continue exploring microRNA modulation and the use of MiPs in muscle regeneration, hopefully moving on to larger animal models as a proof-of-concept on the road to eventual patient therapy.

“If safety and efficacy are confirmed in larger models, this cell-based approach could theoretically help in combating many types of muscle degeneration in patients,” Quattrocelli said.

Adapted (with modifications) from Northwestern Medicine News Center by Will Doss, posted on December 20, 2017.

CBC Catalyst Award (2008):
PIs: Elizabeth McNally (NU; at UChicago at the time of the award), Paul Schumacker and Hossein Ardehali (NU), and R. John Solaro (UIC) for the project:
▸ Proteomic Analysis of Mitochondrial and Sarcomeric Proteins in Cardiomyopathy