Congratulations to Dr. Louis Philipson, the Pediatrics Director of the Kovler Diabetes Center at UChicago, for being named first James C. Tyree Professor in Diabetes Research and Care. Philipson, together with his colleagues Graeme Bell (UChicago), Nissim Hay (UIC) and Joseph Bass (NU), was a co-recipient of a 2011 CBC Spark Award. 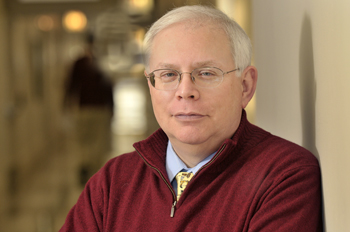 Louis H. Philipson, MD, PhD, professor of medicine and pediatrics and director of the University of Chicago Medicine Kovler Diabetes Center, has been named the first holder of the James C. Tyree Professor in Diabetes Research and Care.

Tyree, who lived with diabetes for more than 25 years, was an advocate of research, patient education, counseling, and behavioral health and wellness services. The former chairman and CEO of Mesirow Financial Holdings, chairman of what was once the Sun-Times Media Group and board member at the University of Chicago Medical Center died in March 2011 at age 53 while being treated at the University of Chicago Medical Center for stomach cancer.

“I wanted to find another way to honor the memory of my husband and continue his legacy in terms of supporting research and the mission of the Kovler Diabetes Center,” said Eve M. Tyree, chairwoman of the board of the James C. Tyree Charitable Foundation. “So, I discussed with my children the idea of endowing a professorship under Jim’s name , and we quickly agreed this was something he would’ve wanted.”

An authority on diabetes, Philipson and his colleagues have discovered insulin gene mutations that cause neonatal diabetes, and he has helped make UChicago Medicine the national leader in the study of monogenic diabetes. He also directs research in preventing and treating Type 1 diabetes. He is the founding director of the University of Chicago Medicine Kovler Diabetes Center, president of the Chicago Community Leadership Board and national president-elect for science and medicine of the American Diabetes Association.

Philipson completed his PhD and medical training at the University of Chicago, and is a graduate of Harvard College. He was recently named a recipient of the 2018 Order of Lincoln Award, which honors public service for the betterment of humanity in Illinois, considered to be the state’s highest civilian honor.

“I am humbled by this magnificent gesture and grateful to the Tyree family and foundation, as it increases the stature and recognition of our entire diabetes program, including the faculty and my colleagues.” said Philipson, director of the Kovler Diabetes Center. “It is particularly meaningful to me because Jim was a special friend and advisor who helped our Diabetes Center get started.”

In 2013, UChicago Medicine dedicated the James C. Tyree Diabetes Education Library in the endocrinology clinic at the Duchossois Center for Advanced Medicine. The library provides patients and their families with access to educational materials, new diabetes technologies, and offers dedicated space for classes and support groups managed by Kovler Diabetes Center educators and clinicians.

Adapted (with modifications) from UChicago Medicine, The Forefront, posted on January 4, 2018.